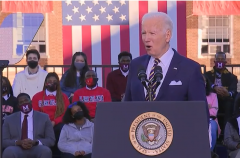 "To protect our democracy, I support changing the Senate rules, whichever way they need to be changed, to prevent a minority of senators from blocking action on voting rights," President Biden said in Atlanta on January 11, 2022. (Photo: Screen capture)

Biden went to Atlanta -- "the cradle of civil rights," he called it -- to discuss "democracy's future" following the January 6 attack on the U.S. Capitol by a group of Trump supporters.

"That's why we're here today, to stand against the forces in America that value power over principle. Forces that attempted a coup, a coup against legally expressed will of the American people by sowing doubt and venting charges of fraud and seeking to steal the 2020 election from the people. They want chaos to reign. We want the people to rule," Biden said.

Biden urged Senate Democrats to scrap the filibuster to pass two bills that will set federal election rules that are weaker than some states allow.

The next few days, when these bills come to a vote, we'll mark a turning point in this nation's history. We will choose -- the issue is what we choose: democracy over autocracy, light over shadows, justice over injustice. I know where I stand. I will not yield. I will not flinch. I will defend the right to vote, our democracy, against all enemies, foreign and, yes, domestic.

And the question is, where will the institution of the United States Senate stand? Every senator, Democrat, Republican, and independent, will have to declare where they stand, not just for the moment but for the ages. Will you stand against voter suppression? Yes or no. That's the question they'll answer.

Establishing his civil rights credentials, Biden said, "Seems like yesterday, the first time I got arrested."

Then, invoking the struggles of civil rights icons, Biden said: "Their struggles here, they're the ones that opened my eyes as a high school student in the late -- late 50s and early 60s. They got me more engaged in the work of my life. And what we're talking about today is rooted in the very idea of America..."

Biden argues that refusal to weaken voter ID laws, failure to ban ballot harvesting, and refusal to allow same-day voter registration are examples of voter "suppression." He wants to restore pre-clearance provisions that allowed the Justice Department to decide if a state can change its voting rules.

Biden, a longtime supporter of the Senate filibuster, has recently decided it should be scrapped to allow passage of the Democrats' voting agenda. He and other Democrats are making hyperbolic arguments about the "end of democracy" and "election subversion" and racism to generate support for squelching the Senate minority.