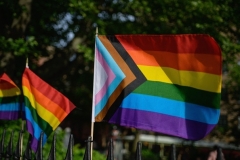 "I want every member of the LGBTQI+ community — especially the kids who will be impacted by this hateful bill — to know that you are loved and accepted just as you are. I have your back, and my Administration will continue to fight for the protections and safety you deserve."

President Biden's tweet referred to a Florida bill that reinforces "the fundamental right of parents to make decisions regarding the upbringing and control of their children..."

The allegedly "hateful" bill also says: "A school district may not encourage classroom discussion about sexual orientation or gender identity in primary grade levels or in a manner that is not age-appropriate or developmentally appropriate for students."

It says school districts "may not adopt procedures or student support forms that require school district personnel to withhold from a parent information about his or her student's mental, emotional, or physical health or well-being."

The bill is intended to prevent leftist educators from encouraging children to question their sexual orientation or gender identity at a young age, behind their parents' backs.

At a news conference in Bartow, Florida on Tuesday, Republican Gov. Ron DeSantis was asked about the bill, and he gave a lengthy reply.

"I haven't seen any bill," the governor told reporters.

The governor then pointed to reports in Florida and around the country about "schools keeping parents out of these decisions, and I don't see how you can do that."

Yes, unfortunately in our society, not every parent does a great job, but to keep parents out and keep them in the dark -- I don't think that that's something that works very well.

I also think one of the things that I think the legislatures are getting at is, anything should be age-appropriate. And I think some would say, even these young kids, you know, elementary school kids, I think that's wrong to have them being involved with things that aren't age-appropriate.

And so, you know, I haven't looked at any particulars of anything, but I do think you've seen instances in which kids are encouraged to be doing stuff with, like, the gender ideology. And I think the parents really do need to be involved in that.

DeSantis said he's heard reports of "people in schools" encouraging kids not to share their identity issues with parents. He said most parents want to know what going on in the schools and with their children.

"And look, at the end of the day, you know, my goal is to educate kids on the subjects -- math, reading, science -- all the things that are so important. I don't want the schools to kind of be a playground for ideological disputes or to try to inject. So I think it's just, let's get parents involved, let's make sure anything discussed is age-appropriate.

DeSantis said if schools veer into "things of a more political nature, that's not really the core mission of what schools need to be doing."