Biden: 'That's Why 81 Million Americans Voted For Me'

(CNSNews.com) - President Joe Biden suggested on Tuesday that a majority of Americans want him to spend trillions of taxpayer dollars on the green new deal and new entitlement programs.

The man who ran for president to "restore the soul of the nation" now says it was his agenda that won the day. As it turns out, Biden's agenda, drafted by leftist Sen. Bernie Sanders, is more radical and expensive than many Americans anticipated.

"It's about building this economy from the bottom up and the middle up. That's what I've done my entire career," Biden told a gathering at a union training facility in Howell, Michigan on Tuesday:

I took this agenda to the country. They said it was time to build an economy that looks out from Scranton, Pennsylvania where I grew up as a kid instead of looking down from Wall Street. An economy looks out from Howell, Michigan, and towns like it all over America that brings people from every race, background, religion into the game.

That's what -- and notwithstanding some of the signs that I saw com(ing) -- that's why 81 million Americans voted for me. The largest number of votes in American history. A clear majority who supported when they supported me. Look, it's now time to deliver.

Biden's mention of "signs that I saw" refers to the hundreds of protesters who lined the highway, jeering Biden as his motorcade sped through Howell. 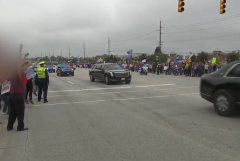 Some signs read "Stop the Spending," and others said, "Kill the Bill." Some read "F*** Joe Biden." And some protesters waved pro-Trump signs.

Biden is correct when he says 81 million Americans voted for him.

But as a post-election Rasmussen poll found, "a sizable number of Biden supporters admit they were voting against Trump rather than for the former vice president."

Among Trump voters, 90% say they voted for the president, while just eight percent (8%) say they were voting against Biden.