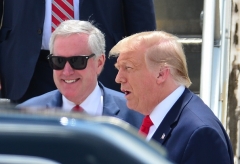 (CNSNews.com) - Giving a speech near his home in Delaware Monday, Vice President Joe Biden said, "Look, yesterday White House Chief of Staff Mark Meadows went on television to admit to the country his administration wasn't even trying -- trying anymore to deal with the pandemic." He said, and I quote, 'We're not going to control the pandemic.'"

Yes, Meadows used those words. But clearly, Meadows did not mean the Trump administration is giving up.

Here's what Meadows actually told CNN's "State of the Union" on Sunday, in context:

Host Jake Tapper interrupted Meadows, asking, "Why aren't we going to get control of the pandemic?"

"Because it's a contagious virus. Just like the flu, it's contagious," Meadows said.

"Yes, but why not make efforts to contain it?" Tapper asked.

"Well, we are making efforts to contain it," Meadows said.

"Let me just say this," Meadows told Tapper: "What we need to do is make sure that we have the proper mitigation factors, whether it's therapies or vaccines or treatments, to make sure that people don't die from this. But to suggest that we're going to actually quarantine all of America..."

So clearly Meadows meant that the contagious virus is impossible to control, absent a job-killing lockdown, until therapies and vaccines are able to keep it at bay. Meadows did not mean the Trump administration doesn't care about controlling it.

But here's what Joe Biden said on Monday:

Biden made that comment after reporters asked Mark Meadows about his "we're not going to control the pandemic" remark on Monday morning:

"I mean, when we look at this, we are going to defeat the virus," Meadows said.

We're--we're not going to control it. We will try to contain it as best we can. If you look at full context of what I was talking about is--is we need to make sure we have therapeutic and vaccines.

We need to make sure that when people get sick that--that they have the kind of therapies that the president of the United States has that we can provide those emergency use authorizations--hopefully, will be coming in very short order.

We are hopeful very hopeful based on a number of conversations that vaccines are just few weeks away, and we are in preparation for that. And yet at the same time a--a national lockdown strategy or a national quarantine strategy that is proposed by the left is not effective, is not what--what ultimately contained or control this virus.

So, any suggestion that we're waving the red flag--I mean the white flag is--is certainly not in keeping with this president. You know him, he doesn't give up, and he's not going to give up until all Americans are safe and we've defeated this virus.

Biden, in his Monday speech, said, "We can in fact end this crisis" -- by spending our way out of it, he meant:

"If he Trump) would only get together with the House and Senate, work out a compromise on the spending bills that are out there in order to deal with everything from being able to safely open our schools. It will cost $200 billion to do it but it's worth doing it. We should do it," Biden said.

"We can lower class sizes. More teachers. Ventilation. PPP. The masks, gloves, all the sanitation. All the sanit--the businesses will be able to be open if we provide the same kind of help which we said we would do.

"There's so much more to do. Testing and tracing. We should be pouring billions of dollars into determining how we get rapid testing. Rapid testing. So you know within hours whether or not the test is negative or positive. Many places you have to wait sometimes up to six or seven days. He's not doing what needs to be done," Biden said.

"And look, folks. I promise you this. I'm never gonna give up. You know--Mr. President, you have to have a little bit of shame--just a little bit of shame. Because people are dying. Here's the point I wanna make. Let me say it clearly. More people are gonna die. As many as 200,000 suggested by some. And it's pointed out if you just wore a mask, kept social distancing, got tested that we could save within now and the end of the year over 100,000 American lives."