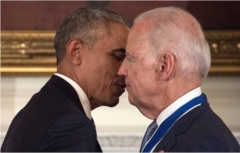 In a proclamation marking the occasion, President Biden said "we have never fully lived up" to our founding principles; and he inserted a paragraph alleging voter suppression:

Today, we are in the midst of grave attempts to suppress and subvert the right to vote in free and fair elections — the most sacred right in our democracy and the very heart of our Constitution.  We must continue to rebuff these threats to ensure that American democracy remains healthy and strong.  My Administration is pursuing an all-of-government effort to protect and expand the fundamental right to vote and make our democracy more equitable and accessible for all Americans.

I have often said that America is the only Nation founded on an idea.  Though we have never fully lived up to it, we have never walked away from it.  We have never stopped striving to fulfill the founding promise of our Nation — that all of us are created equal and deserve to be treated equally throughout our lives.  My Administration is committed to bringing us closer to the fulfillment of that promise.

Article I, Section 4, Clause 1 of the U.S. Constitution says, "The Times, Places and Manner of holding Elections for Senators and Representatives, shall be prescribed in each State by the Legislature thereof; but the Congress may at any time by Law make or alter such Regulations, except as to the Places of chusing Senators."

For most of U.S. history, voters went to the polls on Election Day, with exceptions made for some voters who would be absent on "the Tuesday next after the first Monday in the month of November," as Election Day is designated by law.

Now most states allow early, unconditional, in-person and absentee voting in the weeks before Election Day.

H.R.1, the Democrats' "For the People Act," would do all of those things and much more. The bill has passed the House, but Republicans successfully filibustered S.-1 in the Senate.

This week, Senate Democrats introduced an alternative to S.-1, calling the new bill "The Freedom to Vote Act," which would set "basic national standards to make sure all Americans can cast their ballots in the way that works best for them, regardless of what zip code they live in."

The federal government would set the rules for state and local elections, in other words.

The new bill calls for:

-- Same Day Voter Registration: Ensures every state offers same day registration at a limited number of locations for the 2022 elections and at all polling locations by 2024, allowing election officials, especially in rural areas, time to implement the new requirements.

-- Federal Minimum Standards on Vote by Mail and Drop Boxes: Ensures all voters can request a mail-in ballot, improves the delivery of election mail, and puts in place minimum standards to ensure drop boxes are available and accessible to all voters.

-- Strengthens Voter List Maintenance Standards: Requires that the removal of voters from the rolls is done on the basis of reliable and objective evidence and prohibits the use of returned mail sent by third parties to remove voters.

-- Counting of Provisional Ballots: Requires provisional ballots to count for all eligible races within a county, regardless of the precinct they were cast in.

-- Standards for Voter Identification: Promotes voter confidence and access by requiring a uniform national standard for states that require identification for in-person voting, and allowing voters to present a broad set of identification cards and documents in hard copy and digital form. States that do not have a voter identification requirement would not be required to make any changes.

-- Voting Rights Restoration for Returning Citizens: Restores the right to vote in federal elections for people who have served their time for felony convictions after they are released from prison.

-- Protection of Election Records, Election Infrastructure, and Ballot Tabulation: Strengthens protections for federal election records and election infrastructure in order to protect the integrity and security of ballots and voting systems.

-- Voter-Verified Paper Ballots, Reliable Audits, and Voting System Upgrades: Requires states to use voting systems that use paper ballots that can be verified by voters and to implement reliable post-election audits. Also provides grants for states to purchase new and more secure voting systems and make cybersecurity improvements.

And the bill aims to prevent "partisan manipulation of the redistricting process; establishes uniform disclosure standards for money in politics; and empowers states to make critical investments in their election systems."

A separate bill, the John Lewis Voting Rights Act, has passed the House and is now pending in the Senate. Among other things, this bill would restore pre-clearance provisions, meaning states would need federal permission to change voting procedures deemed discriminatory.

People alleging voter suppression often point to the State of Texas, which recently passed a bill that "makes it easier to vote and harder to cheat," said Governor Gregg Abbott.

The Texas bill, according to the governor's office, creates uniform statewide voting hours, maintains and expands voting access for registered voters that need assistance, prohibits drive-through voting, and enhances transparency by authorizing poll watchers to observe more aspects of the election process. The bill also bans the distribution of unsolicited applications for mail-in ballots and gives voters with a defective mail-in ballot the opportunity to correct the defect.

Meanwhile, the U.S. Justice Department is suing the State of Georgia over Georgia’s new Election Integrity Act, or SB 202. Gov. Brian Kemp has dismissed the lawsuit as "political propaganda."

When Gov. Kemp signed the bill in March, he said there is nothing "Jim Crow" about it, as critics claim:

“It is obvious that neither President Biden nor his handlers have actually read SB 202, which I signed into law yesterday. This bill expands voting access, streamlines vote-counting procedures, and ensures election integrity. There is nothing ‘Jim Crow’ about requiring a photo or state-issued ID to vote by absentee ballot – every Georgia voter must already do so when voting in-person," Kemp said.

"President Biden, the left, and the national media are determined to destroy the sanctity and security of the ballot box. As Secretary of State, I consistently led the fight to protect Georgia elections against power-hungry, partisan activists. As Governor, I won’t back down from keeping Georgia elections secure, accessible, and fair.”