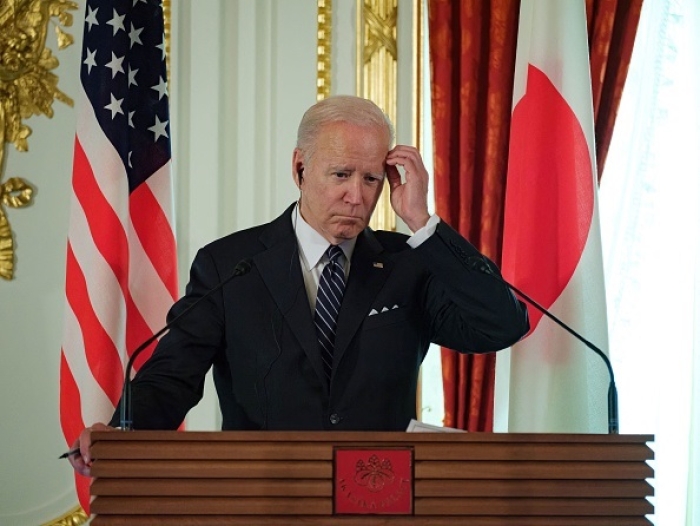 (CNSNews.com) - In a brief exchange with reporters in Tokyo on Monday, President Joe Biden was asked, "In your view, is a recession in the United States inevitable?"

"No," Biden said. He pointed to higher gas prices as a "transition" to a "stronger" world.

"When it comes to the gas prices, we're going thru an incredible transition that is taking place that, God willing, when it's over, we'll be stronger and the world will be stronger and less reliant on fossil fuels when this is over. You see what Europe is doing relative to the importation of Russian gas, you see -- anyway, I won't go through it all.

"But, and what I've been able to do to keep it from getting any worse -- and it's bad -- the price of gas at the pump is something that I've told you, you've heard me say before, would be a matter of great discussion at the kitchen table when I was a kid growing up. It's affecting a lot of families.

"But we have released over 2 hundred and I think 57 thousand -- million -- barrels of oil, I should say, us and the rest of the world. It's helped, but it's not been enough.

"We also find ourselves in a situation where we have food shortages -- food shortages because of Ukraine. There are over -- there are literally millions of bushels of oil, I mean, excuse me, of grain being held up in Ukraine that would fundamentally impact positively on the market in terms of bringing down food prices across the board.

"And so we're finding ourselves in a position where we're working very hard with American farmers and American agricultural products to provide more fertilizer and a whole range of things.

"This is going to be a haul -- this is going to take some time. But in the meantime, it seems to me the best thing I can do in addition to try to get the...Middle Eastern countries, including OPEC, to raise their production of oil and move along that route, is to see to it we continue to grow our economy, create jobs."

Biden said the second way to reduce "daily costs" for Americans is for the federal government to spend more money -- on subsidized child care and tax cuts. "All those things would be very helpful," Biden said, admitting that he's having trouble getting Congress to pass the agenda formerly known as Build Back Better.

China would welcome such a move, but labor unions, some Republicans and even some Democrats object.

"The globalists are saying, remove these tariffs on China. And Joe Biden is trying to make us believe that, if he removes the tariffs on China, that's going to impact inflation, rather than undoing some of his own policy that has brought us to 40-year highs."

"That inflation only started when Joe Biden took office and poured trillions of dollars on an economy that was already recovering from that pandemic.

"So, the president can blame tariffs on China, or the pandemic, or, for that matter, big oil or big meat or Vladimir Putin or anything else he wants for inflation, but the American people know that this inflation is the result of the Democrats' reckless policies."

Cotton also criticized the Democrats' "war on fossil fuels," or what Biden called "an incredible transition."

"One of the reasons gasoline costs so much right now is, the Biden administration has waged a war on fossil fuel," Cotton said:

"This is not an accident. This is what Joe Biden promised in the campaign. This is what far-left members of the Democratic Caucus and Congress want. They want gas to cost $5, $6, $7 a gallon, because they want you out of your pickup truck or your minivan or your SUV, driving electric cars, or taking subways and trains to work.

"This is their intended goal. This is not an accident. What we should be doing is encouraging investors and industry to create more oil and gas and fossil fuel energy in America.

"These things take billions of dollars in investment and years to bring online, whether you're talking about oil and gas wells or pipelines or export facilities. And if the administration makes it clear that they are hostile to those investments, then it's not surprising that people are spending less money in the industry and therefore producing less oil and gas driving up your price at the pump."