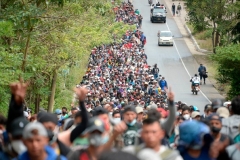 Honduran migrants, part of a caravan heading to the United States, walk along a road in Camotan, Guatemala on January 16, 2021. (Photo by JOHAN ORDONEZ/AFP via Getty Images)

(CNSNews.com) - Ambassador Roberta Jacobson, President Joe Biden's coordinator for the southern border, says the surge of asylum-seekers -- including thousands of unaccompanied children -- stems from "hope," now that Donald Trump is no longer president.

A reporter asked Jacobson if it's a coincidence that illegal immigration ramped up as soon as Biden took office:

"Well, first of all one of the things I think is important is, we've seen surges before," Jacobson responded:

Surges tend to respond to hope. And there was a significant hope for a more humane policy after four years of, you know, pent-up demand. So I don't know whether I would call that a coincidence, but I certainly think that the idea that a more humane policy would be in place may have driven people to make that decision.

But perhaps more importantly, it definitely drove smugglers...to spread disinformation about what was now possible.

Jacobson said the Biden administration "is making sure that we respond to that hope for people who need protection, we respond to that hope in a way that their cases can be adjudicated more quickly. But I don't think anybody would say that coming to the United States in an irregular fashion is a good thing. That's why I've tried repeatedly to dissuade people from--from listening to those smugglers.

"But we're going to try our best to do everything we can at each end of this in the United States, but especially in Central America and Mexico, to ensure we have safe, orderly, and legal migration."

U.S. Customs and Border Patrol announced on Wednesday that in the month of February 2021, it encountered 100,441 persons attempting entry along the Southwest border, a 28 percent increase over January 2021. Single adults account for the majority of encounters, but of the 100,144 people attempting entry in February, 9,457 were unaccompanied children or single minors.

CBP also said it has expelled 72,113 of the people encountered last month.

According to CBP: "The number of encounters at the border has been rising since April 2020 due to ongoing violence, natural disasters, food insecurity, and poverty in the Northern Triangle countries of Central America. As it always has, the number of individuals crossing the border continues to fluctuate and CBP adapts accordingly."

Jacobson described the Biden administration's approach to the crisis at the border as "trying to walk and chew gum at the same time."

"We are trying to convey to everybody in the region that we will have legal processes for people in the future, and we're standing those up as soon as we can.

"But at the same time you cannot come through irregular means. It's dangerous and, you know, the majority of people will be sent out of the United States because that is the truth of it. We want to be honest with people. And so we are trying to send both messages. And smugglers are only trying to send one message. So we're relying on every means we can to get that message out there."

Jacobson delivered a mixed message at the podium. "The border is not open," she insisted. But she also announced that the Biden administration is restarting -- and hoping to expand -- the Central American Minors Program for children to be reunited with a parent who is legally in the United States. And she noted that "we have safely admitted over 1,400 migrants" who had been waiting in Mexico for a chance to present their asylum claims. And she emphasized Biden's more "humane" immigration policy.

President Biden wants Congress to give him $4 billion over four years to address what Jacobson called "the root causes of migration, including corruption, violence, and economic devastation exacerbated by climate change."

The administration aims to change the way impoverished Central American nations are run.

"As part of that plan, we will address the causes that compel individuals to migrate, including improving governance and providing a foundation for investment and economic opportunity, strengthening civilian security, and the rule of law," Jacobson said.

She said President Biden is "clear eyed about the challenge."

"He insists now, as he did then, that governments commit to being true partners in creating the conditions for growth and security. And I want to emphasize that the funds we are asking for from Congress don't go to government leaders. They go to communities, to training, to climate mitigation, to violence prevention, to anti-gang programs. In other words, they go to the people who otherwise migrate in search of hope."