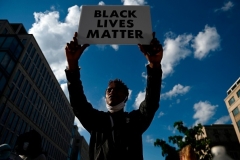 A protester holds up a sign near Black Lives Matter Plaza near the White House on June 24, 2020. (Photo by ANDREW CABALLERO-REYNOLDS/AFP via Getty Images)

Pointing to the American Revolution, Newsome said this country was born in violence and it now exports violence by blowing up other countries. Newsome indicated that his group is operating in that tradition:

Like, let's be very real, and let's observe the history of the 1960s. When black people were rioting, we had their highest growth in wealth, in property ownership.

Think about the last few weeks. Since we started protesting, there have been eight cops fired across the country. You remember they were telling us that there was due process?

That's why the cop that choked Eric Garner to death had kept his job and kept receiving raises for five years. Anytime a cop hurt a woman, hurt a child, hurt pregnant people, hurt an elder, there was always a call for due process. You must wait, you must wait. But the moment people start destroying property, now cops can be fired automatically.

What -- what is this country rewarding? What behavior is it listening to? Obviously not marching. But when people get aggressive and they escalate their protests, then cops get fired, now, you have police officers you have Republican politicians talking about police reform. I don't condone nor do I condemn rioting, but I'm just telling what I observed.

That led to a discussion about Black Jesus:

"I love the Lord," Newsome said. "And my Lord and Savior Jesus Christ is the most famous black radical revolutionary in history. And he was treated just like Dr. King. He was arrested on occasion, and he was also crucified or assassinated. This is what happens to black activists, we are killed by the government."

Newsome called it "hypocrisy and white supremacy in America and in the world that we show portraits of a pasty, white Jesus. Jesus was not white. We all know this."