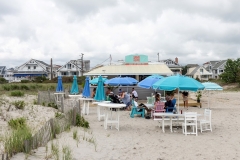 Outdoor dining is the new normal at restaurants like this one in New Jersey that are struggling to stay in business. (Photo by Alexi Rosenfeld/Getty Images)

(CNSNews.com) - Here's some encouraging news heading into the Labor Day weekend:  The number of employed Americans increased for a fourth straight month in August, as 3,756,000 more Americans either returned to or joined the labor force, according to the monthly report produced by the Labor Department's Bureau of Labor Statistics.

Likewise, the nation's unemployment rate dropped for a fourth straight month in August, settling at 8.4 percent vs. 10.2 percent in July -- and well below the record shattering 14.7 percent in April, as the pandemic-induced shutdown took full effect. As recently as February, the unemployment rate was 3.5 percent, a 50-year low.

Total nonfarm payroll employment rose by 1.4 million in August, a gain that was not as robust as the three prior months, but a move in the right direction, nevertheless.

In August, the civilian non-institutional population in the United States was 260,558,000. That included all people 16 and older who did not live in an institution, such as a prison, nursing home or long-term care facility.

Of that civilian non-institutional population, 160,838,000 were participating in the labor force, meaning they either had a job or were actively seeking one during the last month. This resulted in a labor force participation rate of 61.7 percent in August, an improvement from the 61.4 percent in July, but well below the Trump-era high of 63.4 percent set this past January and February.

President Trump tweeted that the unemployment rate "Broke the 10% level faster and deeper than thought possible."

In August, 24.2 million persons reported that they had been unable to work because their employer closed or lost business due to the pandemic--that is, they did not work at all or worked fewer hours at some point in the last 4 weeks due to the pandemic. This measure is down from 31.3 million in July.

About 5.2 million persons not in the labor force in August were prevented from looking for work due to the pandemic. This is down from 6.5 million in July. (To be counted as unemployed, by definition, individuals must either be actively looking for work or on temporary layoff.)

BLS said the supplemental data comes from questions added to the household survey beginning in May to help gauge the effects of the coronavirus pandemic on the labor market.