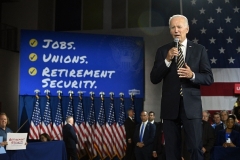 (CNSNews.com) - The Federal Reserve raised interest rates three-quarters of a point on June 15, and Chairman Jerome Powell said another rate hike may happen this month.

Non-farm payrolls added 372,000 jobs in June, well above the consensus estimate of around 268,000 and about even with the 384,000 jobs (revised) added in May, the Labor Department's Bureau of Labor Statistics reported on Friday.

The number of employed Americans interrupted its previous upward march, settling at 158,111,000 in June, down 315,000 from the May number.

But the number of unemployed Americans -- those without a job who have actively looked for work in the prior 4 weeks and are currently available for work -- has steadily declined during Biden's presidency, reaching a Biden-era low of 5,912,000 in June.

This produced an unemployment rate of 3.6 percent in June for the fourth consecutive month.

In June, the civilian non-institutional population in the United States was 263,835,000. That included all people 16 and older who did not live in an institution, such as a prison, nursing home or long-term care facility.

Of that civilian non-institutional population, 164,023,000 were participating in the labor force, meaning they were either employed or unemployed -- they either had a job or were actively seeking one during the last month. This resulted in a labor force participation rate of 62.2 percent in June, down from 62.3 percent in May, and two-tenths of a point lower than the Biden-era high of 62.4 percent achieved in March.

The participation rate was 61.4 percent when Joe Biden took office as the pandemic raged. Today's number, 62.2 percent, is still below the Trump-era high of 63.4 percent in February 2020, just before COVID shut things down.

As BLS notes, the labor force participation rate is an important labor market measure because it represents the relative amount of labor resources available for the production of goods and services.

The number of persons not in the labor force who currently want a job was essentially unchanged at 5.7 million in June. This measure is above its February 2020 level of 5.0 million. These individuals were not counted as unemployed because they were not actively looking for work during the 4 weeks preceding the survey or were unavailable to take a job.

Labor market is 'kind of overheated'

Federal Reserve Chairman Jerome Powell told Congress last month, "We at the Fed will do everything we can to achieve our maximum-employment and price-stability goals."

Powell said the Fed aims to "get inflation back down to 2 percent, because without that, we're not going to be able to have a sustained period of maximum employment where the benefits are spread very widely and where people's wages aren't being eaten up by inflation."

Higher interest rates can slow demand, but they may also produce job losses. Rep. Gregory Meeks (D-N.Y.) asked Powell, "Is it possible that we can continue to have a strong labor market while also curbing inflation?"

"It's certainly possible that we can, and there is a relationship between -- between unemployment and inflation," Powell said.

He said the Fed intends to "bring down inflation while keeping the labor market strong."

"The challenge now is that inflation is at a four-decade high and some of it is -- some of it we can deal with, some of what is really going to be dealt with on global markets, the price of oil and that kind of thing. We can't affect those.

"But the challenge is we're tightening -- we're tightening monetary policy [raising interest rates], and that's designed to -- to drive growth down to a level that's more sustainable and lower, give the supply side a chance to catch up, and give inflation a chance to come down...That's what we're trying to do. We don't have precision tools.

"And, you know, we raise and lower interest rates, it affects the whole economy through many channels. And so there is a risk that -- that that, you know, that that unemployment would move up from what is a historically low level, though a labor market with 4.1 percent or 4.3 percent unemployment is still a very strong labor market.

"Today's rate is 3.6 percent and there are two vacancies for every unemployed person. So that's -- that's a labor market that's kind of overheated."