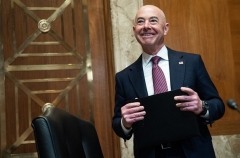 The Department of Homeland Security is worried about climate change. And all DHS employees are expected to fall in line with those concerns. In fact, they'll be educated about the "climate crisis."

On Thursday, DHS released a new Climate Action Plan that presents five "priority actions," including a "DHS-wide climate education plan to raise awareness among our employees about the climate crisis."

DHS admits that getting all employees to buy into the left's version of climate change will be a challenge: "The Department must reach all employees to foster a workforce of understanding and compassion and ensure climate literacy is accepted and embraced," the plan says.

And it sounds like there may be a test: "The Department will monitor progress in climate literacy through employee training and will measure employee understanding of climate change impacts and environmental justice," the plan says.

The DHS Climate Action Plan runs 25 pages and is full of government-speak.

Priority Action #5, the climate "literacy" effort, indicates that DHS employees are expected to accept climate change dogma, as presented by leftists, without question or exception:

"Understanding, mitigating, and adapting to climate change and its impacts require cooperation across every level of DHS," the plan says.

DHS says it will create a "National Security and Climate Honors Program" to give students and recent graduates an opportunity to help DHS adapt to climate change. "DHS will aggressively pursue strategies to ensure a diverse applicant pool, to include applicants from underserved communities..."

The phrase "environmental justice" crops up several times, as follows: "The climate literacy curriculum will be innately tied to environmental and climate justice."

And: "The DHS Office for Civil Rights and Civil Liberties will collaborate with Department subject matter experts and stakeholders to enhance climate literacy and its intersections with environmental justice in DHS federally assisted programs."

At a time when government schools are forcing critical race theory on unwilling students and parents, this DHS "climate literacy" effort bears watching.

Here are the other four "priority actions" identified by DHS in its Climate Action Plan:

-- Creating climate-resilient facilities and infrastructure, including by aiming to electrify 50 percent of the DHS vehicle fleet by 2030.

-- Making sure "climate change considerations are appropriately incorporated" in all DHS planning and processes and mission areas;