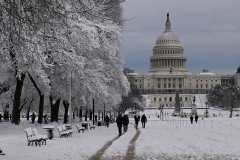 The US Capitol is blanketed in snow on January 3, 2022. (Photo by PABLO PORCIUNCULA/AFP via Getty Images)

(CNSNews.com) - Tom Manger, the top cop entrusted to protect members of Congress and the Capitol, believes the best deterrent for crime is "consequences."

But around the country, leftist district attorneys are going soft on criminals, as is now the case in New York City, where a growing number of citizens are afraid to walk the streets in broad daylight. The new Manhattan District Attorney has exacerbated those concerns (more on that below).

On Wednesday, U.S. Capitol Police Chief Tom Manger told the Senate Rules Committee that he agrees it's important to prosecute the people who attacked Capitol Police officers while breaking into the Capitol building last January 6.

"I am a firm believer that the biggest deterrent for criminal activity is if people think they will face consequences for committing a crime," Manger said:

“And we have been working closely with the Department of Justice. And this ties into -- we have not talked about it, but as you know, we're starting to have field offices around the country and our relationships with local prosecutors there, and the fact we have attorneys assigned to those field offices -- all that is enhancing our reputation for prosecution of threat cases and other cases involving our mission here to protect the Capitol.”

While members of Congress have the benefit of a public official who believes in "consequences" for criminal activity, members of the public in New York City – to name one Democrat-ruled bastion -- do not.

Alvin Bragg, the newly installed Manhattan District Attorney, plans to go easy on all but the most violent criminals, as he outlined this week in a policy memo.

Bragg said his office "will not seek a carceral (prison) sentence other than for homicide or other cases involving the death of a victim, a class B violent felony in which a deadly weapon causes serious physical injury, domestic violence felonies, sex offenses...public corruption, rackets, or major economic crimes...

“For any charge of attempt to cause serious physical injury with a dangerous instrument, ADAs must obtain the approval of an ECAB supervisor to seek a carceral sentence."

There's much more. You can read his soft-on-crime memo here.

Bragg recently told MSNBC he's going to "supervise through the prism of racial justice," which means lighter charges and sentences, if any, for many crimes that used to be felonies.

On the other leftist coast, in California, the Beverly Hills City Council on Tuesday voted 5-0 vote for a resolution demanding the recall of soft-on-crime Los Angeles County District Attorney George Gascón, who has eliminated bail and dropped charges for many crimes, as Bragg now plans to do.

"Over the last 12 months, Los Angeles County has seen a dramatic increase in widespread crime including follow-home robberies, smash-and-grab incidents and the tragic death of beloved Beverly Hills philanthropist Jacqueline Avant,' the city council said in a statement reported by The Daily Mail.

Gascón's recall is not legally binding but it sends a message -- one that may fall on deaf ears.