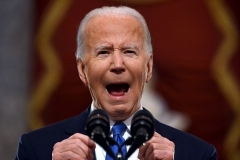 President Joe Biden gives an angry speech at the US Capitol on January 6, 2022, calling out Trump and his followers multiple times. (Photo by JIM WATSON/AFP via Getty Images)

(CNSNews.com) - Democrat strategist James Carville says his party must "gloat and promote" going into the midterm election, talking about what they have (allegedly) accomplished, not what "you didn't get."

"Democrats whine too much," Carville told NBC's "Meet the Press" with Chuck Todd.

You talk aout the fact that -- we pretend to care about child poverty, although no columnist that I read in the paper ever talks about it. It's the lowest child poverty rate we've had in history.

We claim that we care about hourly workers. Hourly workers today have more leverage at any time they've ever had in my 77 years of existence on this planet, all right? You talk about -- we want jobs -- 6.4 million jobs, more jobs than any president ever created in the first term.

All they're (GOP) going to run on is the 2020 election returns or getting Adam Schiff or Jamie Raskin back with revenge. So, just focus on what you've got, what you've done and what you want to do to make people's lives better. That's it.

Carville said the Democrat base "has not been told or informed" of what President Biden and the Democrat Congress have accomplished: "But to me, those are the things that if I'm a Democrat, I much more care about that than some word in a dictionary, that children are going to bed with a full stomach and a warm, you know, a warm house.

"I care that somebody, an hourly worker, is not sitting there working away at $7.25 an hour. And I see these signs all over, even in Louisiana and south Mississippi, $700 signing bonus. Those are -- those are real accomplishments. And it's something that you can run on," Carville said.

"And again, you don't talk about what you didn't get. That's what these -- Democrats whine too much, Chuck. Just quit being a whiny party. And get out there and, and fight, and tell people what you did. And tell people the exact truth.

"The Republican Party stands for nothing other than, 'let's re-litigate the 2020 election' or, 'let's get back at Jamie Raskin." That's it. That's the entire platform."

Raskin sits on the committee focused on the events of January 6.

Carville's advice to the President Joe Biden is to "soldier on."

You know, you had a bad week, but you had a good year. People -- people at the end of the day, are going to judge you on your year and not your week. And this is a tough, hard business. And you've got ups and downs. You got, you get bruised. You get beat up. But every president goes through this.

You know, I've been talking about infrastructure since Eisenhower built the interstate highway system. Now, we've got a trillion dollars' worth of infrastructure coming up. The children that are not living in poverty today are going to ride on better roads, have better broadband, cross better bridges.

Far from having nothing to run on, Republicans are taking aim at Biden's perceived weaknesses going into the midterm election.

The main issues for Republicans stem from Biden's general incompetence -- inflation exacerbated by Democrat spending, supply chain disruptions (empty store shelves), a labor shortage, the COVID resurgence and a shortage of testing, the disastrous exit from Afghanistan, Biden's crimping of domestic energy supplies, and a projection of U.S. weakness in foreign policy amid Russian aggression -- for starters.

Republicans also oppose Biden's shift to the far left of his party, including his about-face on abolishing the Senate filibuster, and his divisive rhetoric – coming from someone who ran for office as  a centrist and a uniter.