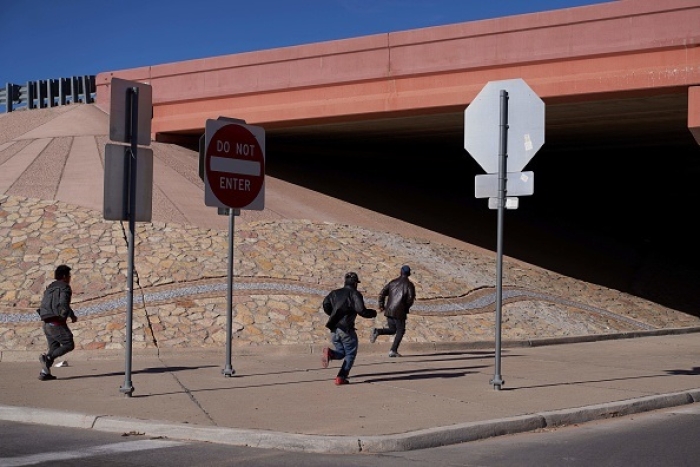 Migrants run into the street to evade law enforcement after illegally crossing into the US via a hole in a fence in El Paso, Texas, on December 22, 2022. (Photo by ALLISON DINNER/AFP via Getty Images)

(CNSNews.com) - U.S. Customs and Border Protection waited until Christmas weekend to announce that it encountered 233,740 migrants illegally crossing the southwest border in November, as overwhelmed border agents say the problem has become unmanageable.

"Today, even before the end of Title 42, apprehensions are eight times higher than manageable," Brandon Judd, the president of the National Border Patrol Council, wrote in an opinion piece on Dec. 20.

The chart below shows the rapid acceleration in illegal immigration since Joe Biden took office, after stating during a debate in September 2019: "I would, in fact, make sure that there is -- we immediately surge to the border all those people who are seeking asylum. They deserve to be heard. That's who we are. We're a nation that says, you want to flee, and you're fleeing oppression, you should come." 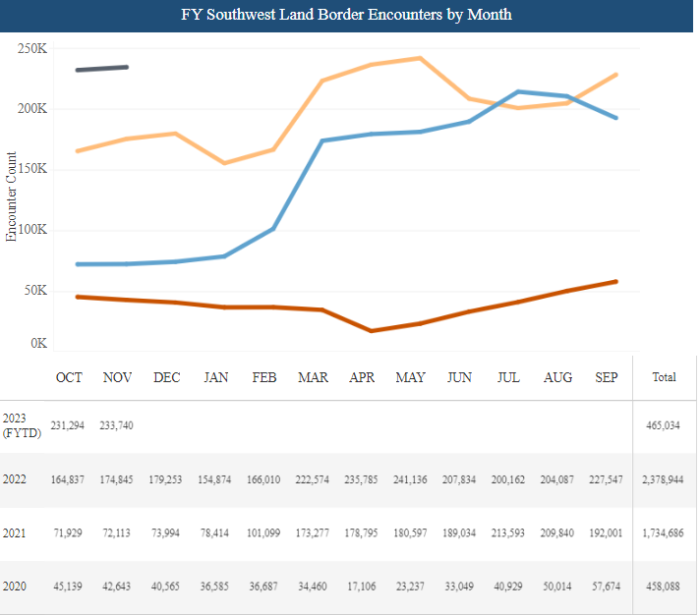 "Individuals from Mexico and northern Central America accounted for just 30% of unique encounters in November, a significant drop from the 53% they represented a year ago, as more migrants arrive from a variety of other countries, including Cuba and Nicaragua,” said CBP Acting Commissioner Troy Miller in a news release on the Friday before Christmas.

CBP noted that while the number of people fleeing "failing communist regimes in Nicaragua and Cuba" is rising, Venezuelans, who previously constituted a part of that increase, are arriving at far lower numbers as a result of the migration enforcement process that includes expulsions to Mexico and lawful pathways.

CBP said encounters of Venezuelans have dropped from roughly 1,100 a day the week before the Homeland Security Department announced a stricter enforcement policy to roughly 100 a day consistently throughout November. So stricter policies are working, as CBP actually said:

By comparison, Mexicans and Northern Central American migrants accounted for 53% of unique encounters in November 2021.

-- Two-thirds (67 percent) of all southwest land border encounters were single adults, with 157,202 encounters in November, a 1.3% decrease compared to October.

CBP said it continues to enforce U.S. immigration law and apply consequences to those without a legal basis to remain in the U.S.

But many migrants claim asylum, which allows them to remain here while they await a hearing in immigration court.

"Current restrictions at the U.S. border have not changed; single adults and families encountered at the Southwest border will continue to be expelled, where appropriate, under the CDC’s Title 42 Order. Once the Title 42 public health order is no longer in place, CBP will process individuals encountered at the border without proper travel documents using its longstanding Title 8 authorities.

"DHS has been executing a comprehensive and deliberate strategy to secure our borders and build a safe, orderly, and humane immigration system. The strategy is based on six pillars: surging resources; increasing efficiency to reduce strain on the border; employing an aggressive consequence regime; bolstering the capacity of NGOs and partner with state and local partners; going after cartels and smugglers; and working with our regional partners.

“This comprehensive plan leverages a whole-of-government approach to prepare for and manage the current and anticipated increases in encounters of noncitizens at our Southwest border."