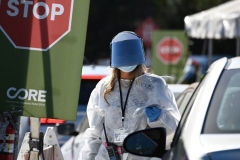 (CNSNews.com) - "COVID-19 cases, hospitalizations, and deaths across the United States are rising," the federal Centers for Disease Control and Prevention says on its website.

Based on the most recent death certificates submitted to CDC's National Center for Health Statistics, COVID-involved deaths in recent weeks are indeed rising, but they remain far below the record 17,089 deaths counted in the week ending April 18.

As the chart below shows, the nation's official COVID death toll, tabulated on a rolling basis as death certificates are submitted, was lowest (3,000-5,000 range) in the warm months of June and early July. After rising to a second peak of 8,228 for the week ending August 1, COVID-involved deaths dipped again to the 3,000-5,000 range in September through early October.

Since the first week of October, however, preliminary data shows the COVID death toll moving back into the 5,000-7,000 range, and probably higher, depending on lagging death certificates, which always boost the death count for the most recent weeks.

Texas has now surpassed New York City in total COVID-involved deaths, with 21,219 for Texas vs. 21,118 for New York City, which is counted separately from the rest of the state.

Dr. Moncef Slaoui, the head of the Trump administration's Operation Warp Speed, told Fox News Monday night that by end the of December, he expects vaccines produced by Pfizer and Moderna to supply 35- to 40-million doses, or enough to immunize about 20 million people.

"We will be immunizing the most at-risk people. But, unfortunately, the size of the at-risk population is much more than 20 or 25 million. So, we are going to need to be patient," Slaoui said.

He said "herd immunity" will require around 75- to 80-percent of the population to be immunized. "That will take several months before we get there, probably May or June," Slaoui said.

"The people who have been infected and recovered are probably immune. The strength of their immunity is unknown to us at this stage. We know that the vaccines are incredibly powerful, with 95 percent, at least the two first vaccines.

"So, in my view, I think we are going to need to really make sure the large majority of the population is immunized before we declare, probably in May or June, that we have things under control."