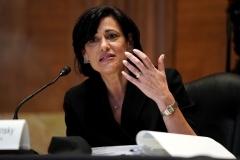 Director of the Centers for Disease Control and Prevention (CDC) Dr. Rochelle Walensky (Photo by GREG NASH/POOL/AFP via Getty Images)

(CNSNews.com) - Dr. Rochelle Walensky, head of the federal Centers for Disease Control and Prevention," said on Wednesday that the highly contagious delta variant is being transmitted mostly to unvaccinated people by unvaccinated people.

Nevertheless, the CDC issued revised guidance on Tuesday, urging masks, once again, for fully vaccinated people in public, indoor places where virus transmission is substantial or high, which means most of the country.

"I know this is not a message America wants to hear," Walensky told CNN's "New Day."

Here's the new science we saw just in the last several days. With prior variants, when people had these rare breakthrough infections, we didn't see the capacity of them to spread the virus to others.

But with the delta variant, we now see in our outbreak investigations...that if you happen to have one of those breakthrough infections that you can actually now pass it to somebody else.

We thought that was really important for people to know and understand because when people are out there vaccinated, thinking that even if they get mild illness they can't give it to someone else. If they're then going to a loved one who is immune-compromised, isn't vaccinated or couldn't be vaccinated, we wanted them to take the protection to protect others.

So that was the new science that prompted the guidance. And you know, it was not -- it weighed heavily. I know this is not a message America wants to hear.

Walensky said "the vast majority" of the delta variant transmission "is coming from unvaccinated people."

She referred to the CDC's color-coded COVID transmission map, which shows most of the country, with the exception of some northern states, is colored orange or red, which indicates substantial or high transmission:

CDC's map shows most of the country has substantial or high COVID transmission rates.

"So, really important to understand that the vast majority is occurring in unvaccinated people, but we wanted people who are vaccinated to understood they could potentially pass this virus if they were one of those breakthrough infections."

"For the most part, absolutely," Walensky replied.

"So then you can understand the frustration in those of us who are vaccinated, saying, why the hell do I have to pay the price for this?" Berman asked.

So we're asking everybody in those areas of orange and red to mask up. And here is the reason why -- if you're a vaccinated person and you're in one of those areas, as you said, a sea of red, a sea of COVID, you have a reasonably high chance, if nobody is wearing a mask, to interact with people who may be infectious.

And so, for every 20 people, one or two of them could get a breakthrough infection...They may only get mild disease, but we wanted them to know that they could bring that mild disease home. They could bring it to others. They think they're protected in terms of transmission.

And we felt it was important that they know and understand -- parents, families of immuno-compromised people, families at risk of severe disease -- that they should protect themselves so they don't bring that disease home to others.

"I don't want to play the blame game," Berman said, "but for vaccinated people, why is this happening to them? I mean, this is a situation created by the high numbers of people still unvaccinated in this country. Is that a fair statement?" he asked.

"This is a situation that is created by more and more transmission of the delta virus among people who are unvaccinated. This is not about who needs to take responsibility. That is not really why we put this guidance out. We put this guidance out because the science demonstrates that if you are vaccinated you could potentially give disease to someone else. And that was what was the motivation for this."

Berman also asked Walensky about the situation in Europe, where some countries are issuing health passes, also dubbed vaccine passports:

"Is that something that the CDC would ever lean into or perhaps advise here?"

"You know, I think some communities are doing that. And that may very well be a path forward," Walensky said.