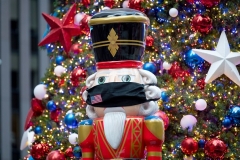 A nutcracker, part of a Christmas display, wears a mask on November 28, 2020 in New York City. (Photo by Alexi Rosenfeld/Getty Images)

(CNSNews.com) - The number of COVID-involved deaths in this country -- 15,594 in the last seven days -- is now reaching levels not seen since the mid-April peak, according to the official tally maintained by the National Center for Health Statistics, which is part of the federal Centers for Disease Control and Prevention.

But of the 261,530 COVID-involved deaths recorded by NCHS as of Dec. 9, fewer than one percent (2,450 or 0.93 percent) involved people age 34 or younger. This includes school-age children forced to learn remotely; and college-age people who, along with the rest of us, are discouraged -- and in some cases barred by executive order -- from patronizing bars and restaurants indoors.

According to death certificates submitted to and recorded by NCHS on a rolling basis, at least 7,367 people (2.81 percent) ages 44 or younger had died of COVID as of Dec. 9.

(CNSNews chart based on CDC Information)

In fact, people over the age of 54 account for 97.18 percent of total COVID deaths. The problem is -- as we hear every day -- that young, asymptomatic people can unknowingly infect older people or those with underlying medical conditions.

More cases means more deaths, but numbers posted by CDC for the most recent weeks, based on death certificates, are preliminary and will rise substantially in the weeks ahead.

According to the most recent death certificate data, COVID-involved deaths peaked at 17,092 for the week ending April 18.

As the chart below shows, the number of COVID-involved deaths steadily declined from mid-April through June, then started increasing in the week ending July 4, reaching an apparent second peak of 8,239 in early August, then dropping again through early October.

(CNSNews chart based on CDC Information)

On Wednesday, Admiral Brett Giroir, M.D., the assistant secretary of Health and Human Services, told CNN he's "incredibly concerned" that the "rate of rise" in COVID cases, hospitalizations and deaths "is the highest we've ever seen."

"It's more widespread. This is not a regional phenomena. But it's really spread all across the country," Giroir told Wolf Blitzer:

Our hospitalizations are well over 100,000. And you're right, Wolf, we could just be starting to see the impact of Thanksgiving travel.

But I want to implore the American people. And thank you for letting me do this, that we can flatten the curve. But you've got to do those simple things that we've been telling everyone for months. Wear a mask, please wear a mask when you're in public and can't physically distance.

You've got to avoid the indoor crowded spaces, because that is a prime area for transmission. Wash your hands.

Look, we don't want to ruin Christmas or Thanksgiving, but if you can avoid travel, please avoid travel. So you don't mix, potentially, people who may have the virus that you've never been exposed to with other people.

And remember, for young people, at least half or maybe 90 percent of individuals are asymptomatic. They show no symptoms. And even for the people who are symptomatic, they have the highest virus (load) right before their symptoms start. So you've got to protect yourself and others by wearing a mask avoiding crowds.

If we do that, and we do that really religiously, we can flatten the curve. If not, as Dr. Fauci says, you know, the country is going to be in for a whole lot of hurt before the vaccine can make an impact.

The end of the pandemic is in sight. The vaccine will work -- it will end the pandemic and return us to as near normal or normal as possible. But we have to do our part right now, which is those mitigation techniques.