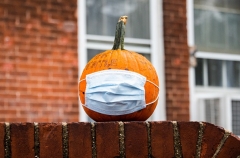 (CNSNews.com) - "The Fake News Media is riding COVID, COVID, COVID, all the way to the Election. Losers!" President Donald Trump tweeted on Monday.

But the latest data from the Centers for Disease Control and Prevention show that the number of people dying from COVID-19 in the United States dropped approximately 73 percent from its peak in the week that ended April 18 to the week that ended on September 5 (the latest week for which the CDC has relatively complete numbers).

Certainly, many partisan activists holding anchor/reporter jobs at CNN and MSNBC, to name a few liberal outlets, are hyping what they dub a second coronavirus surge.

But liberal media outlets omit the fact that deaths from coronavirus are not rising exponentially -- they're falling. In fact, weekly COVID deaths have never again come close to the record 17,077 deaths recorded in the week ending April 18, which was six months ago.

Deaths from COVID, as recorded by death certificates filed with the federal Centers for Disease Control and Prevention, have been falling since a second peak in the week ending August 1, based on preliminary data.

The chart below shows the downward trend.

CDC's National Center for Health Statistics notes that death certificates come in on a lagging basis, meaning that numbers for more recent weeks will increase far more than numbers for earlier weeks.

Going back eight weeks (a point where the COVID death count is unlikely to change much), 4,652 people died of COVID in the week ending Sept. 5.

Since early August, NCHS has recorded 12 weeks of decline in COVID deaths, although, as noted, that may change as states continue to submit death certificates, producing what amounts to the nation's official COVID death count.

Those totals sound scary. But CDC also adds some perspective by looking at the COVID cases and deaths per every hundred thousand people.

At least four of those states are mentioned as swing states in next week's election, which explains the liberal media's focus on the pandemic and the effort to blame Trump for mismanaging it.

President Trump says cases are up "because we TEST, TEST, TEST. A Fake News Media Conspiracy," he tweeted on Monday. "Many young people who heal very fast. 99.9%. Corrupt Media conspiracy at all time high. On November 4th, topic will totally change. VOTE!"

On Tuesday  morning, Trump tweeted: "Until November 4th., Fake News Media is going full on Covid, Covid, Covid. We are rounding the turn. 99.9%."