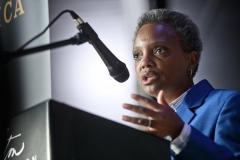 Chicago Mayor Lori Lightfoot discusses the looting of downtown Chicago on the night of Aug. 9-10, 2020. (Photo by Timothy Hiatt/Getty Images)

(CNSNews.com) - The violent night of mob lawlessness in Chicago, where carloads of looters devastated upscale shops along the City's "Magnificent Mile," was based on false information -- spread by social media -- that police had shot an unarmed teenage boy, Mayor Lori Lightfoot told a news conference Monday morning.

Let me also just say, because there continues to be a lot of Twitter traffic that I think is unfortunate -- number one, the individual who fired upon the police yesterday and was taken into custody was a 20-year-old man. He was not a juvenile and he was not unarmed.

Officers responded because they received 911 calls about a man with a gun, with very specific description. A foot chase ensued, the individual fled. He turned around, he fired upon the police, and police returned fire.

He was hit, I believe, in the shoulder and is recovering from those injuries.  But I want to be very, very clear -- this was not an unarmed juvenile, unfortunately as is being propagated on social media.

Lightfoot said police officers "put themselves at great risk" in trying to stop the rioting that lasted well into the early hours of Monday.

"Literally, they were being fired upon as they were working to stop the looters. That can't be a circumstance that goes unchecked." Lightfoot said the looters and vandals will be "fully held accountable." She said efforts are now under way to identify the culprits from "a lot of great footage" gathered during the riot.

"We are not taking this lightly," the mayor said. "We're going full-bore to make sure that those responsible are brought to justice."

Lightfoot said the rioting is not an "incident that requires the National Guard."

She said Illinois State Police joined Chicago police Sunday night, and those are the resources she will tap. "And again," she said in a sing-song voice: "No- we- do- not- need- federal- troops- in- Chicago. Period. Full stop."

Lightfoot repeated something she's said previously, that the federal government should be dealing with gun control to get prevent "anybody and their brother" from bringing illegal guns into the city.

According to the Chicago Tribune:

Hundreds of people swept through the Magnificent Mile and other parts of downtown Chicago early Monday, smashing windows, looting stores, confronting police and at one point exchanging gunfire with officers, authorities said.

More than 100 people were arrested as of 9 a.m., according to Chicago Police Superintendent David Brown. Thirteen officers were injured during the unrest, including a sergeant who was hit by a bottle. A civilian and private security guard were shot and wounded.

Some of the looters used rental trucks to haul away their stolen merchandise.

“This was not an organized protest,” Chicago Police Superintendent David Brown was quoted as saying. "Rather this was an incident of pure criminality. This was an act of violence against our police officers and against our city.”