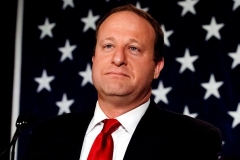 Colorado Gov. Jared Polis is a former U.S. congressman and a former chair of the Colorado Board of Education. (Photo by JASON CONNOLLY/AFP via Getty Images)

(CNSNews.com) - Colorado Gov. Jared Polis (D), a former chair of the state Board of Education, says he expects Colorado schools to reopen in the fall. But in the meantime, he said, "Kids can learn as well or better online."

Chris Wallace, host of "Fox News Sunday," asked Polis how being at home for at least six months will set back students' math and reading skills.

"There's really no excuses in the business of education," Polis said:

We've moved to online. Kids can learn as well or better online. In fact, there's been a few percent of kids in online schools before this crisis.

Now, you need that social side, right, and it's a little bit harder to get that social side in an online setting. But academically, there are no excuses for every kid not to be ready to accomplish their grade-level work, and we can do that online; we can do that in schools; and we can do it through a hybrid, which is what's likely to occur this year, as while generally schools are open, there might need to be periodic, regional, or site-based closures.

Polis said schools "need to function" and "they are going to function."

"It's just not going to look like any other school year," especially in places such as hallways and cafeterias where students congregate, he explained:

"So we call it 'passing time,' when all the kids are in the hallway, lunchtime. The districts are working with our state, I know, and across the country, on schedules that have less interactions, that can slow the spread when there's an inevitable outbreak.

"It's also likely, Chris -- and this isn't a bad thing; it's a fine thing -- you know, maybe 10 percent, 20 percent of parents aren't going to want their kids to return to school in the fall. They're going to want to continue online.

"That actually is fine, as long as those parents are there with those kids; they don't -- they don't have to leave to go to work. In addition, it means there can be less crowding at the schools because of those individual choices that some parents make to continue with online until it's even safer."

Polis said there's a "critical link" between reopening schools and reopening the economy:

In Colorado, it's about almost a quarter of our work force that has kids, relies on the schools. It's similar elsewhere.

You know, not everybody has the luxury of having a two-parent household where one parent can stay home. There's many single parents and there's many parent -- families where both parents work.

And so you need -- that's why we've had day care going throughout this entire piece. We've actually learned a lot from that day care experience that will translate into a safer school experience.

You know, schools are reasonably safe places to be, Chris, and -- and we always have issues, and there's always challenges. We had a school district in western Colorado that had to close for a week because of norovirus about six months ago. That was what created vomiting and intense stomach disease, and they had to close for about a week to clean that out of their schools.

So schools are no stranger to this sort of thing. It's just going to be a bit more prevalent this year. And schools are really working hard on making sure their teachers are set up for success in the online environment.

Polis noted that while "nothing is risk-free," children are far less likely to suffer adverse consequences from coronavirus than adults are: "But the thing is, kids live with parents; kids live with grandparents; kids are around teachers. So that's where it gets a little bit more complicated, Chris."