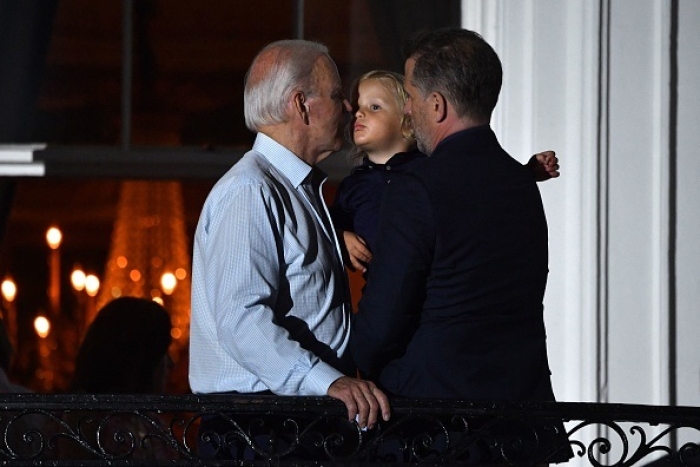 President Joe Biden with his grandson Beau Biden and son Hunter Biden at the White House on July 4, 2022. (Photo by NICHOLAS KAMM/AFP via Getty Images)

Comer said his committee is "most certainly" investigating the discovery of classified documents in Biden's possession, but it's just "part of our overall Biden family influence-peddling investigation."

"Our investigation centers primarily around the money trail -- the money trail of money coming from adversaries in Russia, from the shady Burisma energy deal in Ukraine, and from all these wires to the Biden family interests, to the University of Pennsylvania to the Biden Center for Diplomacy and potentially to Hunter's artwork, from China," Comer told "Mornings with Maria."

Comer said his committee also is investigating "at least three different people that Hunter Biden was directly involved with, that have very close ties to the Chinese Communist Party." He also said the committee wants to know if Hunter chose the people who packed up his father's vice presidential office; and who moved the boxes with classified material to their various locations.

"And this is very concerning, because we learn every day about China's spy ring all over the United States -- that they have police stations now in certain parts of the country, that they've infiltrated our colleges and universities trying to steal our technology and research and development secrets. This is a problem," Comer said.

"China's trying to buy farmland, they're trying to buy interest in our American energy industry, and we learned that the Biden family influence-peddling was a part of that. They were an integral part of China's plan to start getting their foot in the door on more of our American economy.

"This is a national security concern, and when you learn again, as you mentioned, Maria, that so many people in Hunter Biden's orbit were directly involved and potentially communicating with the CCP, then that warrants an investigation."

Comer said if his committee is stonewalled in its attempt to get information, as it most likely will be, "We will hold them in contempt -- we'll start issuing subpoenas. It's a shame we have to do that, but we're going to do whatever we can to get the information we need."

"When should we expect the first subpoena?" Maria Bartiromo asked the chairman.