Commerce Secretary: 'I Don't See Any Reason to Think That We Will Have a Serious Recession' 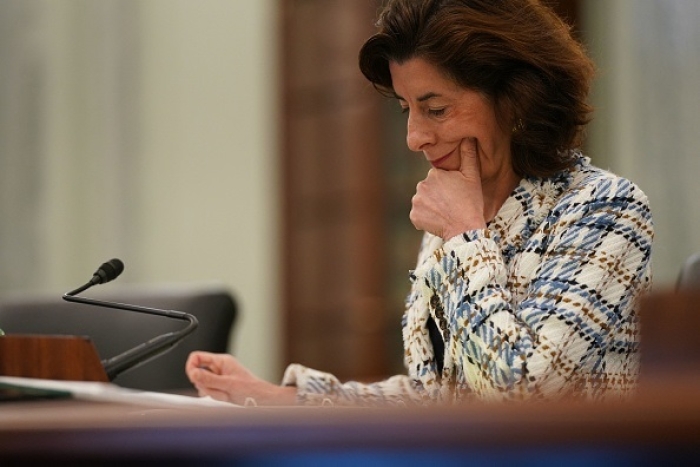 (CNSNews.com) - Commerce Secretary Gina Raimondo admits that inflation is a "problem," but she doesn't think we should be "talking ourselves into a recession."

She spoke to ABC's "This Week" on Sunday, four days before the Bureau of Labor Statistics releases its Consumer Price Index for June 2022. The last two reports, for April and May, showed year-to-year inflation roaring ahead at 8.5 percent and 8.6 percent, respectively.

"So let me say this: the economy, in the past year, year-and-a-half, has been growing at unprecedently high rates, 5, 6 percent," Raimondo said:

"I don't think that we should expect that, right -- I think it's normal to think as we continue to come out of the pandemic we will transition to a more -- to a robust growth, but a more steady growth.

"So I do think at some point, you know, we will see a less rapid growth in the economy, but I don't see any reason to think that we will have a serious recession, in fact -- you know, by no measure, right? We recovered all the jobs since the pandemic. People's household balance sheets are strong. Companies are doing well. Companies are hiring. Companies are growing.

"I was recently talking to the CEO of a major U.S. company who said to me, you know, it's almost like we're trying to talk ourselves into a recession. He said he sees no signs of it. His customers, both individual and companies, are buying. So the fundamentals of this economy are very strong.

"Inflation is our problem and it is our top priority. And so I think perhaps a transition to a more traditional growth level, but I don't think we should be talking ourselves into a recession."

"People talk about it in different ways," she said:

"But if you ask folks what they're worried about, they'll either say grocery store prices are high, food prices are high, energy prices, gas prices, that's in people's daily lives, right? So if -- every day you're confronted with these high prices it's hard on folks, and the president has just said that in that clip I heard, it's tough for people.

"That's why it's the president's number-one priority. It's our number one priority to get a handle on these prices and we will.

"The Fed is taking strong action. Our president's administration, we're doing everything we know how to do. You're starting to see gas prices come down, wholesale gas prices are coming down. But until we do get a handle on inflation, I think it's natural for a family to be feeling that pinch.

"Having said that, you have to -- George, I was the governor of Rhode Island when the pandemic hit, a state of a million people, at one point in time, we had 15 percent of our population collecting unemployment insurance. And I woke up every day with a pit in my stomach, how are we going to get folks back to work, open restaurants, open manufacturing facilities? And we've done that.

"We averted -- because of the president's leadership, we averted the deep, deep recession, and I don't think we will ever see that. The challenge now is prices and we're working on that and we will get that under control."

Host George Stephanopoulos noted that even some Democrats "want the president to be more aggressive" in fighting inflation. He asked Raimondo what more the president can do.

She said Congress needs to pass the CHIPS Act, "which would increase the domestic supply of semiconductors and also start a supply chain office in the Department of Commerce. That has to pass. Has to pass now. Not in six months from now -- now. It's bipartisan," Raimondo said.

Senate Republican Leader Mitch McConnell (R-Ky.) said two weeks ago, "there will be no bipartisan USICA (CHIPS bill) as long as Democrats are pursuing a partisan reconciliation bill," which is a scaled down version of Biden's "Build Back Better" agenda.

Raimondo said Congress should pass both bills: "What's in that reconciliation bill?" she asked. "Allowing Medicare to negotiate for drug prices. What will that do? Bring down the prices of medicine for the average American consumer.

She accused McConnell of "playing politics with our national security."