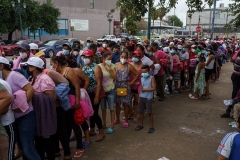 Migrants who were sent back to Mexico under Title 42 line up for food at a camp near the border in Reynosa, Tamaulipas, Mexico on July 10, 2021. They are waiting for another chance to enter the U.S. (Photo by PAUL RATJE/AFP via Getty Images)

(CNSNews.com) - Rep. Henry Cuellar, a Democrat who represents some of the Texas border communities, says the Biden White House must do more to discourage illegal immigration, which shows no sign of abating.

"I have told the White House that they had to -- they are deporting people under Title 42 (COVID restrictions), and I support Title 42, especially right now -- that they need to publicize and show images of people being deported," Cuellar told Fox News's Charles Payne on Wednesday.

Traditionally, March, April, May and June are the peak months almost every year. We're now in July. And just this morning, they stopped a group of 509 people, one single group, I emphasize, 509 people coming in, in one -- just one group. So these numbers are not stopping.

And with all due respect to the administration, they need to put a pause on this now, for the sake of our border communities.

Cuellar said border communities are suffering. He said last week in the Lower Rio Grande Valley, Border Patrol reported more than 20,000 encounters with illegal aliens in just that one week:

"La Joya is in my district," Cuellar said:

And I talked to the officials this afternoon. And we're going to talk again on Friday, but what's happening is, when Border Patrol drops folks off at a charity, the charity gets overloaded. And then they drop them off at a hotel without even telling the local officials. And that's not right.

The charity needs to tell the local officials, especially if they are COVID-positive. It's not fair to -- by local communities. There are people being released there that might have COVID-19. And we need to just make sure that we communicate with each other.

Cuellar said Border Patrol agents are contracting COVID in greater numbers, with 80 of them now infected and more than a hundred who are self-isolating.

Cuellar has been pleading for stricter border control for months. Payne asked him if anyone is relaying his concerns to the Biden White House:

"Again, the political appointees are a different thing, but they need to understand they need to have the back of the men and women from DHS. They certainly need to take care of our border communities. Prioritize them, please," he urged.