Democrat Feminist: Humans Are Either Male or Female: 'Everything Else Is a Lie' 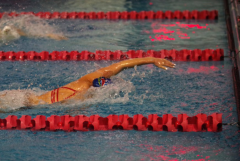 (CNSNews.com) - When men insist they are women, then compete in women's sports -- defeating female competitors by virtue of their different physiology -- it's time to say stop, says a woman who describes herself as a registered Democrat.

Kara Dansky, the president of the Women's Human Rights Campaign, told Fox News's Tucker Carlson Tuesday night that she's a "registered Democrat" who has "made common cause with many Republicans that are fighting back against gender ideology."

“And what I really want everyone to understand is that words like ‘gender identity’ don't have any meaning. They really don't. I mean, they're defined variously, inconsistently and vaguely in ways that don't make any sense,” Dansky said.

“Every single human being is either a male person or a female person. Everything else is a lie.”

The most recent example of a male-born human competing in women's sports happened at a swim meet in Ohio this past weekend, when University of Pennsylvania student Lia Thomas easily beat the competition, shattering numerous records in the process.

"Many of us saw this coming," Dansky said. "It's important that we all understand that situations like what we're seeing in Pennsylvania -- at the University of Pennsylvania are not anomalous. This is happening all over the country."

While many parents object to transgenders in women’s sports, many students are "scared" to speak out because it's "very unpopular" to say that men shouldn't be competing against women, Dansky said:

Very often this is framed as having so-called transgender athletes participating in women's sports. And I really want us to get away from that language. The truth of the matter is that he is a man. And he's been allowed to compete in women's sports.

Part of the problem is that a lot of this is happening because of a series of orders that the Biden administration issued over the course of the first six months of the administration impacting Title 9, among other federal administrative laws.

And it essentially says that throughout federal administrative law, the word "sex" has to be redefined to include the words "gender identity." And that is a disaster for women and girls, including women who are on the U-Penn women's swimming team.

At the end of the interview, Dansky asked Carlson if she could make an appeal to his viewers:

So I have one plea to make, which is this. As Tucker knows, I'm a registered Democrat, as he said in my introduction. I have made common cause with many Republicans that are fighting back against gender ideology.

The Women's Human Rights Campaign describes itself as a group of volunteer women from across the globe dedicated to protecting women and girls "on the basis of sex rather than 'gender' or 'gender identity.'"

The group's declaration argues that men who have female gender identities should not be included in the category of women in relation to human rights.

"It is unreasonable to suggest that promoting women’s rights ‘stigmatises’ any group of men, or removes rights from them," the group says.