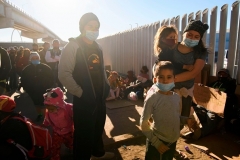 Asylum seekers from countries including Honduras wait to cross into the United States in Tijuana, Mexico on February 19, 2021. (Photo by PATRICK T. FALLON/AFP via Getty Images)

(CNSNews.com) - Homeland Security Secretary Alejandro Mayorkas says there is no immigration "crisis" at the Southwest border, but one Democrat lawmaker who represents a border community has a different view.

Rep. Vincente Gonzalez (D-Texas) said the surge of Central Americans at the U.S. border could have a "catastrophic" effect, not only on his district but also on the Democrat Party:

"[F]or thousands of people to be reaching our border in the middle of a pandemic, in a disorderly fashion, could be catastrophic to my district," Rep. Gonzalez told CNN on Monday.

He noted that in recent weeks, migrants who made it into the United States illegally "were processed or released."

If that is the message that we send to Central America and around the world, I can assure you it won't be long before we have tens of thousands of people showing up to our border, and it'll be catastrophic for our party, for our country, for my region, for my district, in the middle of a pandemic, in an area where we've lost over 3,000 people in my small congressional district.

So I think we need to have a better plan in place. I think we -- asylum-seekers should be able to ask for asylum and be processed in their home country or a neighboring country. And we shouldn't have a policy in place that impulses people to make this 2,000-mile trek, where cartels and human traffickers are enriching themselves.

Gonzalez called for a "humane, compassionate way for people to ask for asylum in their home countries or their neighboring countries, and if they get the document, they can get on a plane for $400 and fly in."

He noted that more than 80 percent of asylum-seekers "never qualify for asylum, which is another issue we need to address. Immigration needs a holistic approach in America."

Last month, in a report on the illegal immigration surge, Politico quoted Gonzalez as saying, "Our party should be concerned. If we go off the rails, it’s going to be bad for us,” Gonzalez said. “Biden is going to be dealing with a minority in Congress if he continues down some of these paths.”

But on Monday, Homeland Security Secretary Mayorkas said "no," there is no crisis at the border.

"I think that the--the answer is no. I think there is a challenge at the border that we are managing, and we have our resources dedicated to--to managing it," Mayorkas said.

"The men and women of the Department of Homeland Security are working around the clock, seven days a week, to ensure that we do not have a crisis at the border, that we manage the challenge as acute as the challenge is. And they are not doing it alone. This is a challenge that the border communities, that non-governmental organizations, that people who care for individuals seeking humanitarian relief all understand it is an imperative.

"Everyone understands what occurred before us, what we need to do now, and we are getting it done," Mayorkas said.

The reporter pointed to the recent, Biden-era surge in illegal border crossings. "So how is this not a crisis?" the reporter asked.

"We are challenged at the border," Mayorkas repeated. "The men and women of the Department of Homeland Security are meeting that challenge. It is a stressful challenge and we are--that is why quite frankly we are working as hard as we are not only in addressing the urgency of the challenge but also in building the capacity to manage it and to meet our humanitarian aspirations in execution of the president's vision."