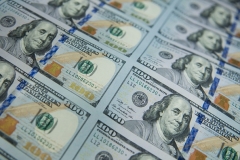 (CNSNews.com) - The Senate on Saturday passed the Democrats' $1.9 trillion stimulus bill without a single Republican vote. This week, the House plans to take up the Senate bill, to avoid further negotiations.

White House Communications Director Kate Bedingfield, speaking to CNN's "State of the Union" on Sunday, called the pork-filled bill "a historic and transformational piece of legislation" that "is going to cut child poverty in half, in part by making a historic investment in the child tax credit."

Even families who earn little or no income would get the money.

And -- in a new twist -- families won't have to wait until they file their taxes to get the child tax credit. The payments would start going out monthly this July through December, sort of like the universal basic income payments advocated by some leftists (see below).

According to Rep. Richard Neal's website, the expanded child allowance is a "down payment on Democrats' anti-poverty plans."

Here's how his office described it:

The legislation also includes a significant increase in the child tax credit for 2021 only, offering $3,000 per child instead of $2,000, and $3,600 for children under age 6. In addition, parents of 17-year-olds would be eligible. The credit would be fully refundable, which means households can get the full benefit even if they have no income or owe no income taxes.

The full expanded credit would be available to individuals making up to $75,000 and married couples making up to $150,000. Households making above those amounts wouldn’t lose any of the $2,000-per-child credit that already exists.

The credit expansion is a down payment on Democrats’ antipoverty plans, and many lawmakers in the party want to make a near-universal child allowance a permanent part of the tax system. The IRS would begin making monthly payments of the expanded child tax credit as early as July, giving families their money for the 2021 tax year well ahead of the tax-filing season that starts in January 2022. Families would be able to opt out of the monthly payments.

During the presidential primary campaign, Democrat Andrew Yang advocated a so-called Freedom Dividend, a form of universal basic income that would guarantee payments of $1,000 a month, or $12,000 a year, to all U.S. citizens over the age of 18 – “no questions asked,” he said.

President Joe Biden, speaking after the Senate passed the stimulus bill, said the nation "has suffered too much for much too long, and everything in this package is designed to ease the suffering, meet the most urgent needs of the nation and put us in a better position to prevail, starting with beating this virus and vaccinating the country."

Biden did not mention the expanded child tax credit. But he said the $1,400 stimulus checks will start going "out the door" this month.

"That means the mortgage can get paid. That means the child can stay in community college. That means maintaining health insurance you have. It's going to make a big difference in so many lives in this country."