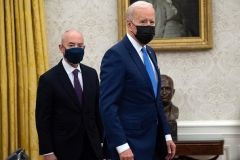 (CNSNews.com) - Homeland Security Secretary Alejandro Mayorkas made the rounds of the Sunday talk shows, insisting that the U.S.-Mexico border is "secure" and "closed," even as children (and others) flood into the United States illegally, by the tens of thousands, even hundreds of thousands.

U.S. Customs and Border Protection reported 100,441 apprehensions at the Southwest border in February, a 28 percent increase from January. And the floodgates remain open, despite Mayorkas' insistence to the contrary.

On the Sunday shows, Mayorkas blamed the Trump administration for the surge in illegal immigration, especially that of unaccompanied children, which ramped up as soon as Joe Biden took office with a promise of greater "humanity," which has been interpreted as leniency:

"Number one, the prior administration dismantled the orderly and safe way that these children could make their claims," Mayorkas told "Fox News Sunday."

It tore down the Central American Minors Program that allow these children to make their claims under United States' law without having to take the perilous journey.

Yet, if they arrive at the border, we have a responsibility to allow them to make their claims under United States' law and to address -- these are vulnerable children, to address their needs. And we can do so in a safe and orderly manner.

It takes time because the entire system was dismantled. We are working on it and we will succeed because that is what we do.

Mayorkas insisted, "We do expel families. We are working with Mexico to increase Mexico's capacity to receive the expelled families. The border is secure. The border is closed. We've been unequivocal in that and we are operationalizing our processes, executing our plans. We are a nation of laws, and we treat vulnerable children humanely. We can do it, and we are doing it.

Mayorkas said something similar on NBC's "Meet the Press" with Chuck Todd:

Chuck, our message has been straightforward and simple and it's true. The border is closed. We are expelling families, we are expelling single adults and we've made a decision that we will not expel young vulnerable children.

I think we are executing on our plans and, quite frankly, when we are finished doing so, the American public will look back on this and say we've secured our border and we upheld our values and our principles as a nation.

"We are safely processing the children who do come to our border. We strongly urge, and the message is clear, not to do so now. I cannot overstate the perils of the journey that they take. And, regrettably, I am all too aware of the tragedies that have occurred and continue to occur along that journey.

"But in the meantime, and in parallel, we are rebuilding those orderly systems both in Mexico with -- in close partnership with the Mexican government and in the countries of Guatemala, Honduras and El Salvador, so that they in fact do not need to take that dangerous journey. We are working in parallel streams to rebuild a process that has been entirely dismantled."

On CNN's "State of the Union," host Dana Bash noted that even some Democrat congressmen are blaming changes in Biden administration policy for fueling the crisis. "How do you respond?" she asked the Homeland Security Secretary:

"I respectfully disagree with them," Mayorkas replied:

Let me just say that we have a number of work streams in place. As I mentioned, we are dealing with the needs of the children now. We are rebuilding orderly ways in which the children can make their claims without having to take the perilous journey to the border.

And we are elevating our messaging, so that the individuals do know that they cannot come to the border. The border is closed...We are expelling families. We are expelling single adults. We have communicated and we will continue to communicate to the children, do not come.

I was going to mention but a minute -- a minute ago that we encountered three children under the ages of 10, three siblings whose mother was murdered -- murdered during the journey. Do not come. Give us the time to build an orderly system that will enable you to make your claim under United States law without taking the journey and imperiling your lives.

Same story on ABC's "This Week" with Martha Raddatz, who told Mayorkas: "We heard the sheriff say it, the governor say it, and the migrants I spoke to say it. They are coming across because they believe they will be welcomed under the Biden administration. You said yourself three weeks ago, we're not saying don't come, we're saying don't come now. President Biden had a stronger message later, but the messages are mixed at best, Mr. Secretary."

To which Mayorkas responded:

We are encouraging children not to come. Now is not the time to come. Do not come. The journey is dangerous. We are building safe, orderly and humane ways to address the needs of vulnerable children. Do not come.

Raddatz asked him, "Why were you not prepared for this?"

Martha, let me let me be clear. We have seen large numbers of migration in the past. We know how to address it. We have a plan. We are executing on our plan and we will succeed. This is what we do.

But one thing is also clear, that it takes time. And why is what does it take time now? Why is it especially challenging and difficult now? Because the entire system under United States law that has been place throughout administrations of both parties was dismantled in its entirety by the Trump administration.

"It's exactly about vulnerable children," Raddatz agreed: "You have approximately 5,200 children currently being held in adult border facilities, well over the 2019 peak during the Trump administration. They're only supposed to stay there for 72 hours, but they've been there for more than 10 days, 650 kids, and it's getting worse," she said.

Mayorkas repeated that "it takes time...because we're dealing with the dismantled system. And we did not have the ordinary safe and just transition from one administration to another.

"And so, we are executing on our plans. We have dispatched FEMA, the Federal Emergency Management Administration, to assist HHS in building additional capacity to address the needs of children and to move those children through to their sponsors in the United States to shelter them in a way that they deserve and that their needs require.

"That is what we are doing. When people speak, well, you knew of this -- plans aren't made at 20,000 feet. Plans are contracts, personnel, policies, training, procedures, all of the elements of operations that were entirely dismantled..."