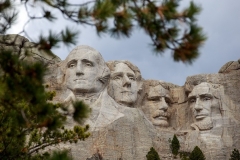 (CNSNews.com) - The Democrat Party tweeted Monday night that an Independence Day celebration at Mt. Rushmore on July 3, which President Trump plans to attend, would be "glorifying white supremacy."

The tweet, mentioned by Fox News's Laura Ingraham when it appeared shortly after 10 p.m., was quickly removed by the Democrats, but not before others captured it (see below).

A now-deleted tweet posted by the Democrat National Committee on Monday, June 29, ahead of President Trump's planned visit to Mt. Rushmore. (Screen capture)

South Dakota Gov. Kristi Noem told Ingraham, "The DNC is doing a grave disservice to this country. And honestly, that tweet right there represents the choice that people have in this election."

Noem mentioned all four of the former president carved into the South Dakota granite:

Washington was the only leader that we have had that unanimously was chosen to lead our country at its birth. He was the one that everybody agreed we needed at that important time.

And Teddy Roosevelt was someone who dined with the first African-American at the White House. He had an adventurous spirit. We just really appreciate their leadership.

It will host a fireworks celebration on July 3, the first one in many years, and President Donald Trump is expected to join Gov. Noem for the event.

Anywhere Trump goes, controversy attends. In this case, some Native Americans are demanding the return of the Black Hills and the removal of the four famous faces carved into the rock.

"Never on my watch," Noem has tweeted about the removal of the sculptures.

"Our history is incredibly important to this country and what we stand for,” the governor said on Monday night.

“It's what makes America special. You know, our leaders have flaws, absolutely, but when we focus on the flaws, we miss the virtues and the lessons that they can teach us.

“So I think possibly, this is a wonderful opportunity for us to celebrate America's birthday, to join together and have some unity, and really focus on opportunity in America. Perhaps that’s what they don't want to talk about."