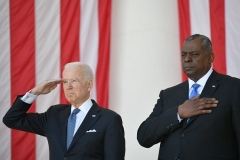 (CNSNews.com) - "It's important for us to maintain the trust and confidence of the American people," Defense Secretary Lloyd Austin told Fox News's Bret Baier on Saturday at the Reagan National Defense Forum.

Austin was commenting on a Reagan Forum survey showing that only 45 percent of Americans report having a great deal of trust and confidence in the U.S. military. "Alarmingly," the survey said, "this is down 25 points in the last three years."

According to the survey: "Almost a year into the Biden Administration and a few months removed from the Afghanistan withdrawal, the American people are equivocal and unsure about U.S. global leadership and military capabilities."

On Monday, Pentagon spokesman John Kirby told reporters that Austin wants to "spend more time with the survey" to find out "if there's some wisdom he can glean" from it.

"I mean, he had had a chance to look at it briefly before going to the Reagan National Defense Forum," Kirby said:

And I think you heard him say that, certainly, the numbers represented in that survey are not going in the direction he would like to see them, in terms of trust and confidence. It's concerning. So, I think he wants to take a little bit more time to look at it.

I won't speculate for him about what's behind those numbers, but I would point you to what he talked about. There was the interview with Bret Baier that, you know, that we're not -- we are an all-volunteer force, and the men and women who serve in this department come from homes and families all over the country.

And so, the American public's perceptions of the United States military matters to us, not just from a recruiting perspective, although that's valid, but also from a representational perspective. And the trust and confidence of the American people, we continue to believe, is critically important to the institution.

And just like it matters to us, it also makes us -- we are not immune to the kinds of polarization that we see out in the American society. I mean, we -- because we come from America, what was out there in our society affects us, it absolutely does. So, I think he wants to spend a little bit more time and try to see if there's some wisdom he can glean from the survey.

In his Dec. 4 interview with Baier, Austin said, "the trends in this survey are not trends that we would want to see."

It's important for us to maintain the trust and confidence of the American people.

I think we need to do a a better job of telling that story, telling the story of these wonderful troops and their families that have sacrificed so much in the past and continue to sacrifice on a daily basis. We need to remind, you know, America about what they're doing and the sacrifices they're making. And I think, you know, that's something we're going to work on.

Baeir also asked Austin if he has any regrets about the U.S. withdrawal from Afghanistan:

Although Austin refused to speculate about the reasons for the declining confidence in the U.S. military, the report from the Reagan Forum offers two paragraphs on those reasons, as follows:

Among those with little or not much confidence in the military, their answers were more mixed. The most common answer was political leadership, at 13%, followed by servicemembers and anything related to scandals within the military, both at 9%. Close behind at 8% were the military leadership and the concept that the military is too expensive or has the wrong priorities. While high trust and confidence seems to attribute to our men and women in uniform, the lack of confidence in our military seems to be more about a general negative sense than a predominate or precise reason.