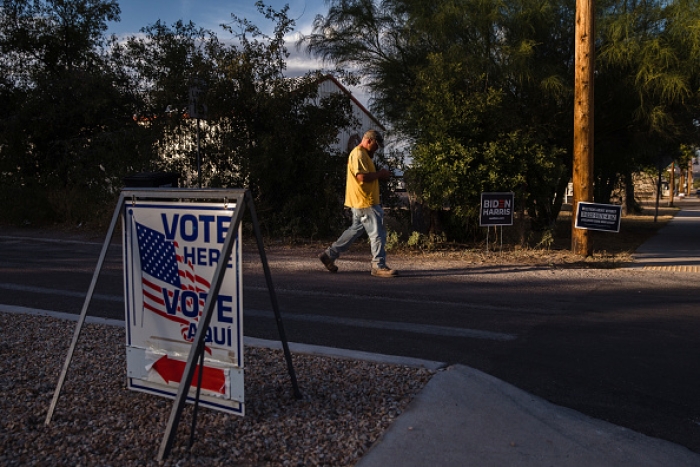 A man leaves a polling station in Benson, Arizona, on November 3, 2020. (Photo by ARIANA DREHSLER/AFP via Getty Images)

(CNSNews.com) - The U.S. Justice Department announced this week that it is suing the State of Arizona over a recently enacted state law requiring residents who haven't already done so to show proof of citizenship before they can vote in a presidential election or before they can vote by mail in any federal election.

The new law, which takes effect in January 2023, requires election officials to verify the citizenship of the "federal-only" voters who have not previously provided proof of citizenship.

But Arizona Attorney General Mark Brnovich called the lawsuit "the height of hypocrisy (and) absurdity."

"It's curious that Arizona passes a law that says you have to prove you are a citizen to vote in a presidential election or vote by mail, and at the same time, the Biden administration is going to sue us while they're allowing millions of people to illegally enter the country," Brnovich told Fox News Wednesday night.

"So I guess in addition to giving people flights and hotel rooms they now want to give them the right to vote even though they're not citizens."

Brnovich said "people can draw their own conclusions" about why the Biden Justice Department objects to proof-of-citizenship requirements. "But we know that the hard left, the neo-Marxist vision is to have no borders, and you know, they want this socialist utopia and that is why they are trying to nationalize our elections, socialize our economy.

“But I think the reality is -- I am a first-generation American -- and most people fleeing the socialist countries know they're economic basket cases, so why in the hell would they vote for Democrats when they are promising more socialism in this country?"

"In Joe Biden's twisted version of America, anyone can apparently enter the country, enter a voting booth and even a women's restroom without any consequences."

Assistant Attorney General Kristen Clarke of the Justice Department’s Civil Rights Division said the Arizona law "turns the clock back on progress by imposing unlawful and unnecessary requirements that would block eligible voters from the registration rolls for certain federal elections."

According to the Arizona Secretary of State's Office, acceptable proofs of citizenship include:

Republican Gov. Doug Ducey signed the bill on March 30, writing at the time:

“Arizona has a proud history of making voting accessible. The state is a leader in secure mail-in voting, on-site early voting, and allowing counties to establish voting day polling locations that best serve their communities. Arizonans also value election integrity, which can and should exist in tandem to, not in conflict with, access to the ballot.

“H.B. 2492 does not disturb the safe harbor granted to Arizona voters who registered to vote prior to Prop 200’s passage. What H.B. 2492 does address is a growing number of new registrants participating in elections who have not provided evidence of citizenship.”

Ducey noted that the number of "federal only" voters has risen substantially, from 21 voters statewide in 2014, when the federal form was first used to register Arizona voters who failed to provide evidence of citizenship; to 11,600 in the 2020 general election.

"In just Maricopa County alone, there are currently 13,042 active registered voters who have not provided evidence of citizenship to vote through use of the federal form," the governor wrote.