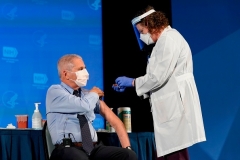 Examples include nine members of the New York Yankees (four players and five staffers); and Bill Mahr, who had to cancel the May 14 taping of "Real Time With Bill Mahr," although he said he is asymptomatic.

Dr. Anthony Fauci, one of President Biden's senior COVID advisers, agreed: "There are certainly breakthrough infections," he said on Monday night, but "this is not something that's a shocker to me at all."

Fauci told MSNBC's "All In" with Chris Hayes, "Breakthrough infections mean you have been vaccinated, but you still get infected."

But Fauci said most of those infected people have no symptoms, "which means it is very likely that the level of virus in their nasopharynx is low and they won't transmit it.

So, although you don't like to see breakthroughs, the fact is, this is one of the encouraging aspects about the efficacy of the vaccine, or to protect you completely against infection. If you do get infected, the chances are that you're going to be without symptoms, and the chances are very likely that you'll not be able to transmit it to other people.

So, again, you don't like to see breakthroughs. But to me, this is not something that's a shocker to me at all.”

Fauci defended the CDC's latest guidance that fully vaccinated people do not need to wear masks, indoors or outdoors, in most situations:

There's discussion and concern about the abruptness of the announcement and all that, but the science behind it, the fact that we know now that these vaccines are highly, highly effective, number one.

Number two, they're really, really good against variants. I mean, the predominant variant in our country is the 117, the one that originated in the U.K. It protects very well against that.

And the other thing is that -- and this relates to the New York Yankees situation -- is that we're learning now with recent studies that even if you do get a breakthrough infection when you're vaccinated, the chances of your transmitting it to someone else is exceedingly low.

So, low likelihood of transmission, low likelihood of getting infected. When you do get infected, chances are you're going to be without symptoms. And because of that, that was the accumulating scientific data that prompted the CDC to make that recommendation that when people are vaccinated, they can feel safe that they are not going to get infected, whether they're outdoors or indoors.

That's the bottom line of that, to get people to appreciate, you get vaccinated, and you're really quite safe from getting infected. There will always be breakthrough infections. But given the denominator of people who are vaccinated, that's a very, very rare event.

So, the bottom line, Chris, it's good news. And in many respects, it really is a big, you know, endorsement for why people should be getting vaccinated.

Fauci said the CDC's abrupt about-face on face masks -- apparently without consulting the White House -- shows the "considerable degree of independence on the decision-making process, based on the science" under President Biden. "That's the good news. There's no doubt about that."

"The process, Chris, you could argue about, could it have been done differently, and I think you could have some good argument that it might have been done a little bit differently. But the fundamental basis upon which the decision was made was a sound scientific basis."