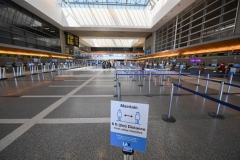 (CNSNews.com) - Get out your tape measure: Maybe you don't need to stand six feet away from your masked neighbor after all.

Three feet may be good enough, according to a new study cited by CNN's Jake Tapper on Sunday.

"Does this study suggest to you that three feet is good enough?" Tapper asked the oft-quoted "expert."

"It does, indeed," said Fauci:

And that's exactly the point I'm making...What the CDC wants to do is, they want to accumulate data. And when the data shows that there is an ability to be three feet, they will act accordingly.

They have clearly noted those data. They are, in fact, doing studies themselves. And when the data are just analyzed -- and it's going to be soon. I mean, Jake, you're asking the right questions. And the CDC is very well aware that data are accumulating making it look more like three feet are OK under certain circumstances. They're analyzing that.

And I can assure you, within a reasonable period of time, quite reasonable, they will be giving guidelines according to the data that they have. It won't be very long, I promise you.

Fauci said he didn't want to "get ahead of official guidelines."

"I can tell you and promise you, I talk to the CDC, to Dr. Walensky every single day. She is acutely aware of the accumulation of data and the fact that her team will be acting on the data the way they always do. So, stay tuned. It's going to come, and it's going to come soon."

The study, published March 10 in the Journal of Clinical Infectious Diseases, concludes that "Lower physical distancing policies can be adopted in school settings with masking mandates without negatively impacting student or staff safety."

On Sunday, Fauci told CNN's "State of the Union" he's concerned that "although we are going in the right direction," COVID cases have reached a plateau, and it's possible that cases may start to rise again as people become less cautious.

He warned against opening up too fast:

And that's what exactly happened in Europe. They had a diminution of cases, they plateaued, and they pulled back on public health measures. You see the pictures in the paper and on TV. They have opened the restaurants. They have opened some of the bars.

The younger people particularly stopped wearing masks, and then, all of a sudden, you have a surge that went right back up. And that's where we are right now.

We can avoid that, Jake. We can avoid that if we continue to vaccinate people, get more and more protection without all of a sudden pulling back on public health measures. We will do that. We will gradually be able to pull them back. And if things go as we planned, just as the president said, by the time we get into the early summer, the Fourth of July weekend, we really will have a considerable degree of normality.

But we don't want to let that escape from our grasp by being too precipitous in pulling back.

Fauci said he's keeping a close watch on coronavirus variants that appear to be more contagious:

"So, the best way that we can avoid any threat from variants is do two things: get as many people vaccinated as quickly as we possibly can, and to continue with the public health measures, until we get this broad umbrella of protection over society, that the level of infection is very low.

"There's a tenet in virology that's so true, Jake, and that is, viruses don't mutate unless they replicate. And replication means it's spreading around in the community. If you can blunt that, you will be blunting the evolution of mutants, for sure."