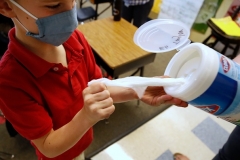 A teacher hands out hand wipes to students at Freedom Preparatory Academy on September 10, 2020 in Provo, Utah. (Photo by GEORGE FREY/AFP via Getty Images)

(CNSNews.com) - Based on the latest death certificate data submitted to the National Center for Health Statistics (part of the federal Centers for Disease Control), the number of deaths attributed to COVID-19 has now declined for at least five straight weeks since late July.

For the week ending August 29, NCHS recorded 2,750 deaths involving COVID, although that number is preliminary and will rise as more death certificates come in.

As the chart below shows, COVID-involved deaths declined for ten straight weeks following the April 18 peak, then rose again for four weeks around the July 4 holiday.

Since August, COVID deaths have dropped every week through mid-September, although data for the two most recent weeks is expected to change significantly.

COVID-involved deaths include patients with confirmed or presumed COVID-19, which is given the ICD–10 medical diagnostic code U07.1

According to a Gallup Poll published on September 9:

Americans' outlook for the coronavirus situation has become less negative in recent weeks, with less than half (47%) now saying the situation is "getting worse." This is down from 61% in mid-August, and is the lowest for this measure since early June, before COVID-19 cases surged along with the loosening restrictions around the country. Meanwhile, higher percentages of Americans describe the situation as "getting better" (30%) or "staying the same" (23%).

The poll also notes that despite feeling less concerned about the spread of the coronavirus since early August, Americans are not easing up on their social distancing.