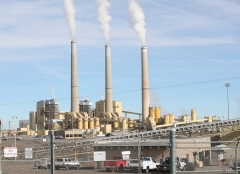 (CNSNews.com) - As Texans struggle through a prolonged cold snap that has left many homes dark and now flooded with burst water pipes, attention turns to the state-managed power grid and the relative merits of fossil fuels versus green energy.

On Thursday, Texas Public Policy Foundation Vice President Chuck DeVore said Texas residents have a lot of "digging out" to do, but once that's done, it's time to consider the "resiliency" of power sources, in addition to reliability.

“And as far as what to do in the future, I think that we need to assign a value to grid reliability and resiliency," DeVore told "The Larry O'Connor Show" on WMAL radio in Washington, D.C.

“Now, resiliency is a less well-known factor.  Let me give you a brief example," he said:

One of the most resilient types of power is a coal-fired power plant, because they store an enormous amount of fuel on site. And so, you know, typically, 60 to 90 days of coal is sitting there...next to the power plant.

In terms of natural gas, they don't do that. They generate power directly off the pipeline. So if the pipeline gets interrupted, your power's going to go down pretty quickly with that natural gas power plant.

And so you would say that coal power has more resiliency than natural gas. And, of course, wind and solar have no resiliency at all. And so these are very important things if you want the lights to go on when you want them.

Joe Biden campaigned on a promise to achieve net-zero carbon emissions by 2050, which means the elimination of coal and fossil fuels.

DeVore on Thursday said the challenge with renewable energy, wind and solar, is, "the more you get, the more costly it gets to keep the grid reliable."

And I don't mean just a little bit more costly. I mean, it starts to become exponential. Because what happens when you have -- let's say you're going to do what Biden wants to do and eventually go to one hundred percent renewable.  What does that even mean?

Well, what it means is, you have to have --  you have to build out far more solar and wind than you need, and then you have to figure out how to store the energy --  not just by the hour, or the day or the week, but by the season – because, of course, we have winter and we have summer; we have different peak times for wind, depending on where you are in the country, and you have to be able to store up enough excess electricity to use it when it's not so sunny and not so windy.

And then you have a further complication. We do have some battery storage in Texas -- not as much as California -- it's very costly. But when the cold snap hit, the capacity of the batteries was reduced by 60 percent, because they don't do well in the cold, right? So it's a challenge.

And everything is, you know, fun and games and unicorns and rainbows until you start to pass about 20 percent of the energy being provided by unreliable renewables.

And once you get past 20 percent, you start to have what has happened in Texas, and what happened last year in California, and will no doubt happen more frequently in California and unfortunately, begin to happen more across the Western United States in what's called the Western Interconnection, which is the western grid, of which California is the  biggest constituent components. So, it's coming.

Texas has a mix of fossil fuels and renewable energy: