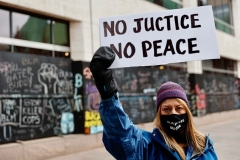 A protester holds a sign outside the Courthouse In Minneapolis, Minnesota on April 19, 2021. (Photo by KEREM YUCEL/AFP via Getty Images)

(CNSNews.com) - As media/political activists on the left promote the idea that racist police are targeting black people, Americans don't often hear the other side of the issue -- why police are showing up in the first place.

On Wednesday night, a former Tucson police officer said the agitators "don't know what they're talking about." And by demonizing police while giving a pass to the perpetrators, "They are destroying our country."

We need to start addressing the way people are responding when police are showing up to the scene. We need to talk about in our society why we have so many violent people and people that are committing crimes.

Law enforcement officers don't show up to your house just because they run through the neighborhood they want to kill you. You are committing crimes, you are doing, committing violent crimes that are necessitating their response. So, we need to not only try to talk about reforming policing, but most importantly, we need to talk about people.

People need to stop doing things that get them killed, and that cause police officers to have to use deadly force against them.

He noted that there's no "magical training that you can give police officers" that would stop criminals from pulling guns on them or resisting arrest.

"So, I think they're setting the landscape of, of, you know, degrading law enforcement," which will discourage applications for law enforcement jobs or cause police to back off.

"They are destroying our country, and they're destroying it from the inside out, starting with law enforcement," Tatum said.