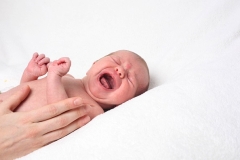 (CNSNews.com) - The Abbott company says it is "working closely with the U.S. Food and Drug Administration to restart operations at the Sturgis, Mich., facility," but that is not expected to happen any time soon.

Dr. Scott Gottlieb, the former FDA Commissioner and now a Pfizer board member, on Sunday blamed both the Abbott baby formula facility and the Food and Drug Administration for problems leading to the current baby formula shortage.

"Well, these look, were persistent problems that appear to have been handled poorly, certainly by the company. FDA didn't exert all the oversight that they could have of that facility. There were known problems with that facility going back many years. There were findings on previous inspections," Gottlieb told CBS's "Face the Nation."

"The agency had a 34-page whistle-blower report in hand making pretty serious allegations that there was...data falsification information withheld from inspectors. So these should have prompted more aggressive action earlier.

"I think, now that that facility has been shut by Abbott and production isn't going on, it's going to be hard to clear the facility. The overhang of allegations of data falsification are going to be the kinds of allegations that are hard for the agency to clear, even if they're not able to prove a causal relationship between the infections that we saw in children and the facility itself, which -- which, so far, the agency hasn't been able to prove, and they may never be able to prove that."

Gottlieb said the FDA found five different strains of the Cronobacter bacteria in the Sturgis facility this year, and "that is a serious concern. And it doesn't appear to have been a state-of-the-art facility, based on the findings in that 483" (FDA document).

Abbott says the FDA did not find any contamination of baby formula after the February recall, but inspectors did find Cronobacter in "non-product contact areas at the Sturgis facility."

The recall was triggered by illness in four infants, two of whom died, but so far, as Abbott noted, the illnesses have not been linked to Abbott formula.

"So, they should have been under close supervision," Gottlieb said:

"Look, we have -- we have sort of the worst of both possible worlds right now. We have a regulatory scheme that is stringent enough that it does create obstacles to getting into the market for new entrants. There's only been one new entrant in the last 15 years that's a domestically based manufacturer, a company, ByHeart.

"But, at the same time, it doesn't provide stringent enough oversight of the resulting oligopoly -- three companies control 80 percent of the market -- to ensure that there's no snafus that can cause shutdown of those facilities.

"And so, when you do have a shutdown, when the market's that concentrated, it creates these distributed shortages that we're seeing right now that are very hard to resolve. They're going to eventually need to get that facility reopened. The timeline for that is very unclear right now."

The Abbott company says it is "working closely with the U.S. Food and Drug Administration to restart operations at the Sturgis, Mich., facility," but that is not expected to happen any time soon.

Meanwhile, Abbott said it is making "progress on corrective actions" required by the FDA.

On Friday, May 13, Abbott said one of its priorities is to mitigate supply issues.

"In particular we’ve been focusing on production in our Cootehill, Ireland, facility to serve state Special Supplemental Nutrition Program for Women, Infants and Children (WIC) consumers. Abbott has been working with the USDA and WIC agencies and paying rebates on competitive products in states where Abbott holds the WIC contract, when Similac is not available.

"Abbott will continue to pay rebates for competitive products through August 31. This means program participants will continue to be able to obtain formula, free of charge whether it is Similac or formula from another manufacturer.

"We know that the recall has worsened the industry-wide infant formula shortage, and we have been working to get as much product into the hands of parents as we can. Since February:

-- "We’ve air shipped millions of cans of infant formula powder into the U.S. from our FDA-registered facility in Cootehill, Ireland.

-- "We are offering an increased number and value of coupons available for all our infant formula products, including Similac ready-to-feed, to enable customers to purchase formula, either free or deeply discounted.

-- "And our other manufacturing facilities are running at full capacity as we continue to prioritize production of infant formula to help replenish the supply in the market.

"We are confident that we can continue to produce safe, high-quality infant formula at all of our facilities as we have been doing for millions of babies around the world for decades."