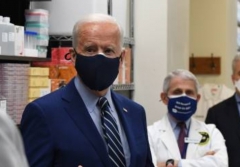 (CNSNews.com) - "Keep an open mind" on the possible origins of the coronavirus that has killed millions of people, Dr. Anthony Fauci, the nation's top infectious disease expert, said repeatedly on Thursday morning in an interview with MSNBC's "Morning Joe."

Asked if he thought the lab-leak theory was a "conspiracy," as an April 20 email from NIH Director Dr. Francis Collins to Fauci suggests, Fauci said, "No, not necessarily."

The situation is that we didn't know and we still don't know what the origin is. That if you look historically and the way things rolled out, we all felt -- and still do, actually, Willie, that it is more likely to be a natural jumping of species from an animal reservoir to a human.

However, since we don't know that for sure, that you've got to keep an open mind. So you can say you think one thing is more likely than the other, but the fact that it could have been something else clearly was there.

It was low on the list of what we thought the likelihood was. But, in fact, that's the reason why we all are now saying there's a considerable amount, appropriately, of interest in trying to find out what the origin is.

And that's why we're all in favor of a fair, open investigation to see if we can actually find out the origin. Because we want to make sure this doesn't happen again.

‘Most likely’ the virus came from an animal

Host Willie Geist asked Fauci if he thinks the lab leak theory is "more credible today than it was" early on in the pandemic:

I think one of the things that has stimulated interest, which I think is important to investigate, is the idea, and we need to find out if it's true or not, of the fact that there were some people who worked at the lab who got ill.

We need to find out, (A), is that true? And (B), what was the nature of their illness? And those are things we just need to find out. So if that's something that turns out to be an important feature, then you can say, hmm, that may lean a little bit more towards one.

But what I think people might be getting confused (about) is the conflation of, is there more interest in it or is there really more evidence? The evidence is very sparse. And that's the reason why we want to keep looking. The evidence for one or the other.

If you look historically, the way things have rolled out, the original Sars/cov1, MERS, Ebola, the diseases that emerge from a reservoir in an animal, it happens all the time. And that's the reason why we feel that's the most likely.

But since we haven't proven that, you've got to keep an open mind, and an open mind means you continue to look. As an open mind. Not in a pejorative way of thinking that they did something nefarious or what happened.  Just keep an open mind and take a look. And that's what everyone wants right now.

Geist then asked Fauci if the evidence favors an animal-to-human transmission more than it does a lab leak: "In other words, aren't they both equally possible?"

"Obviously, when you say 'possible,' anything is possible," Fauci responded:

And that's the reason why I say you need to keep an open mind. One of the things that people need to understand is that you need to keep looking for that link of the jump, naturally, from an animal to a human.

That could have been an epidemiological mistake, because they may have wiped out evidence of the jumping of species. But you still have to keep looking. And that's what everyone is doing, to continue to look.

I have to keep emphasizing that, because people who are pejorative about it and conflate different things keep saying, well, you think this, you think this. An open mind is the clear thing we need to do.

Fauci said getting to the bottom of the pandemic requires "better access to all the information."

"I mean, it's obviously in China's interests to find out exactly what it is...So you have to keep looking for it. I mean, obviously, you want openness and cooperation. One of the ways you can get it is, don't be accusatory. Try to get both a forensic, a scientific, and an investigational approach. I think the accusatory part about it is only going to get them to pull back even more.

"We've got to do it in a combination of diplomacy, scientific forensic investigation, and do it in a way of the people of good faith, not who want to do blame, but people who in good faith are really trying to find out what the Orange is. And we're seeing a lot of, you know -- I don't even want to describe it. A lot of pointing of fingers and things like that. Keep an open mind and go after the truth," Fauci said.

Geist followed up, asking, wouldn't China want to hide what may have leaked out of their own Wuhan Institute of Virology, especially if the virus was being designed as a bioweapon?

"Willie, I don't want to be speculating on that," Fauci responded.

Fauci said we may never find out where the virus originated. "But what is not helpful is that very accusatory, pejorative nature of it, as opposed to keeping truly an open mind."