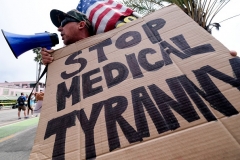 A protester takes part in a rally against Covid-19 vaccine mandates, in Santa Monica, California, on August 29, 2021. (Photo by RINGO CHIU/AFP via Getty Images)

(CNSNews.com) - President Joe Biden didn't get "ahead of the science" last month, when he announced his administration's "plan…for every...adult to get a booster shot eight months after their second vaccination," Dr. Anthony Fauci said on Sunday.

Biden told the nation: "Pending approval from the Food and Drug Administration and the CDC’s Committee of outside experts, we’ll be ready to start these booster — this booster program during the week of September 20, in which time anyone fully vaccinated on or before January 20 will be eligible to get a booster shot."

But on Friday, the FDA limited booster shots to high-risk and elderly (65+) individuals.

Why did Biden get it wrong? NBC's Chuck Todd asked Fauci on "Meet the Press."

"Well, Chuck, you know, if you look at really what happened, it wasn't getting ahead of the science," Fauci said:

The president and the medical group at the White House said, we are planning to be able to roll out boosters essentially for everyone, you know, 16 years of age and older. That was a plan that was always contingent, and every one of us said that, contingent upon the FDA's normal regulatory process, together with their advisers, to make a decision as to exactly what that rollout would look like. And that's exactly what happened.

A very competent group of people who advise the FDA deliberated and came to the conclusion that rather than have essentially everyone … who has gotten the regular immunization of two shots should be able to get boosted, they made it on the restrictions that you said, 65 years of age or older or those 18 to 64 with underlying conditions that might make their response to infection be severe, and those who have institutional or occupational situations, would make them more risk of getting exposed and infected. So that's a fair chunk of people in the United States.

So we look at it as one phase of the rollout. So I understand why there might be confusion because I think people were not understanding the difference of planning for something and actually what element of that -- what proportion of it you're actually going to roll out. And that's exactly what happened.

Fauci said he still believes -- "as a scientist who has been following it" -- that the recommended regime will turn out to be full vaccination plus a booster:

"But you want to do that according to what the data tells you, including the risk-benefit ratio, particularly for the younger people who do not generally get as much severe disease as the elderly and others.

"So I believe that there's a good chance that, as we get into the coming months, into the next year, that you will see the data pointing to the benefit of having a much broader blanket of people. We don't know that for sure now. And that's the reason why data are going to continue to come to the FDA, and they're going to continue to evaluate it."

Fauci said the initial two-dose regimen was a response to an "emergency situation."

"We needed to get vaccines out to people to be lifesaving. And in fact they have likely saved millions of lives already. That doesn't mean that's the end of what this regimen should be. And on a -- on a week by week, month by month basis, as we gather more data, we may get a better concept of what the proper regimen will be."

Fauci said the administration's "highest priority" is getting shots into the arms of approximately 70 million people in this country who remain unvaccinated.

Todd asked Fauci how long natural immunity lasts, for people who have recovered from COVID:

"We do know that when you do get infected, you get strong immunity. There's no doubt about that. The durability is unclear," Fauci said.

"There's another fact we know, that if you do get infected and recover and get vaccinated, the level of your immunity is extraordinarily high, surpassing any of the other two-dose vaccines that you get.

"So there are certain things we do know, the two things I just mentioned. The thing that's still unclear is what the durability of natural infection induced immunity is, and what is the scope of its protection against different variants."

Fauci said with winter approaching, "we always have to worry about the other respiratory infections, particularly influenza. So we strongly encourage people to also get the influenza vaccine.

"I believe if we get that overwhelming majority of the people vaccinated as we enter into the fall and winter, we can have good control over this and not have a really bad winter at all."