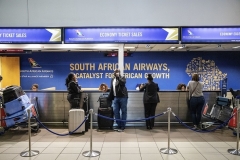 (CNSNews.com) - On this Friday after a heavily traveled Thanksgiving, the headlines blare bad news about a new coronavirus mutation found in South Africa that already has prompted the United Kingdom and a few European countries to ban travel to and from that country.

The United State has not yet done so.

On Friday morning, Dr. Anthony Fauci told CNN that U.S. scientists are "in very active communication with our South African colleagues," but the U.S. won't ban travel to and from South Africa until they learn more:

“Well, I mean, obviously as soon as we find out more information we will make a decision as quickly as we possibly can. You always put these things on the table, but you don’t want to say you're going to do it until you have some scientific reason to do it.

"That's the reason why we're rushing now to get that scientific data to try and make an informed decision about something like that.”

Fauci said although "anything is possible...there's no indication" that the new South African variant is already in the United States. Nor do scientist know if the new variant evades the vaccines administered in the United States or spreads more rapidly:

"Well, first of all you want to find out if in fact it does evade the vaccines that we're doing. There is always the possibility of doing what the U.K. has done, namely, block travel from South Africa and related countries.

“We don't know that. That's certainly something you think about and get prepared to do.  You're prepared to do everything you need to do to protect the American public. But you want to make sure there's a basis for doing that, and that's what we're doing right now.”

Fauci said U.S. scientists and South African scientists plan to confer later this morning," "to really get the facts." Fauci said scientists want to learn "the precise molecular makeup" of the new mutation, so they can test for it.

"So you can have a prediction that it might evade (vaccination), or you can actually prove it. Right now, we are getting the material together with our South African colleagues to get a situation where you can actually directly test it.

So right now, you are talking about sort of like a red flag that this might be an issue, but we don't know.

"But once you test it, you'll know for sure whether or not it does or does not evade the antibodies that we make, for example, against the virus through a vaccine or following convalescence after you get infected, when you get antibodies -- do those antibodies protect you against this new virus? The answer is we don't know right now, but we're going to find out for sure."

Meanwhile, Fauci renewed his pitch for vaccination as well as booster shots in this country, saying, "the next couple of months are going to be up to us."