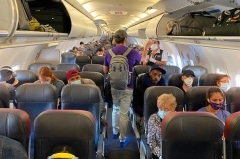 Domestic airlines require passengers to wear masks, but so far, they do not require proof of vaccination to board the plane. (Photo by ELEONORE SENS/AFP via Getty Images)

(CNSNews.com) - On Sunday, Dr. Anthony Fauci seemed to endorse vaccine mandate for domestic travel, telling ABC's "This Week," "anything that could get people more vaccinated would be welcome."  But on Monday evening, Fauci said a vaccine requirement for domestic air travelers is just a "possibility," "but that doesn't mean it's going to happen."

"No, what I said, Jim, was that everything that comes up as a possibility, we put it on the table and we consider it," Fauci said:

"That does not mean that it is going to be likely to happen. Right now, I don't think people should expect that we're going to have a requirement in domestic flights for people to be vaccinated.

"When I was asked that question, I gave an honest answer. It's on the table, and we consider it, but that doesn't mean it's going to happen. I doubt if we're going to see something like that in the reasonably foreseeable future."

Fauci, pressed on what happens if "things get worse," repeated: "You always keep things open for consideration and you monitor things on a daily and weekly basis and if sometimes you have to make changes to be commensurate with the situation, you do.

"Right now, I don't see this being announced or happening in the reasonable future unless things change dramatically."

Fauci said he supports anything that can be done to keep the country safe: "If the situation arise(s) where that's something we think should be important to do, we'll do it. Right now, that's not going to be done. But we never take anything off the table. We always keep things open for consideration."

In that same interview with CNN's Jim Acosta, who was the substitute host on "The Situation Room," Fauci explained why the federal Centers for Disease Control and Prevention has shortened the recommended isolation times for people who test positive for the virus but don't have symptoms:

The reason is that with the sheer volume of new cases that we are having and that we expect to continue with omicron, one of the things we want to be careful of is that we don't have so many people out. I mean, obviously if you have symptoms, you should not be out.

But if you are asymptomatic and you are infected, we want to get people back to the jobs. Particularly those with essential jobs to keep our society running smoothly.

So I think that was a very prudent and good choice on the part of the CDC, which we spent a considerable amount of time discussing. Namely, getting people back in half the time that they would have been out so they can get back to the workplace doing things that are important to keep society running smoothly.

Fauci said it "makes sense" to isolate for five days instead of ten, especially for fully vaccinated people with breakthrough cases who are either mildly symptomatic or asymptomatic: "So I don't think it's confusing. I think it's a rather crisp recommendation," Fauci added.