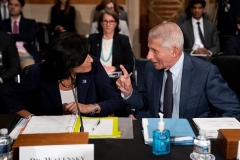 Dr. Anthony Fauci, director of the National Institute of Allergy and Infectious Diseases, speaks to Rochelle Walensky, Director of the Centers for Disease Control and Prevention, before the Senate Health, Education, Labor, and Pensions Committee hearing on July 20, 2021. (Photo by STEFANI REYNOLDS/POOL/AFP via Getty Images)

(CNSNews.com) - The highly contagious delta variant now accounts for 83 percent of new COVID cases in this country, and it's been detected in more than 90 countries, health officials told a Senate hearing on Tuesday.

Dr. Anthony Fauci, head of the National Institute of Allergy and Infectious Diseases, called it "troubling news," especially for the unvaccinated.

But a growing number of fully vaccinated Americans are testing positive, as it turns out, which raises the question of re-masking and booster shots:

"The sobering news that you've already heard of is the fact that we are now challenged with a very difficult and problematic variant referred to as the delta variant," Fauci said.

The reason it's so formidable is the fact that it has the capability of transmitting efficiently from human to human in an extraordinary manner, well beyond any of the other variants that we've experienced up to now, which has led to it becoming the dominant variant in this country.

When I spoke to you last time, it was about 1 percent to 3 percent of the variants in the population. Right now, it's gone to over 80 percent, and in some regions of the country, as high as 90 percent.

That is the troubling news. The fact is that, however...our vaccines that we're using in this country are very effective against this variant, particularly, I point out, to the situation regarding advanced disease leading to hospitalizations and deaths, where it's still well in the 90 percent of effectiveness.

According to press reports, at least six of the Texas Democrats who fled to Washington, D.C., last week have tested positive for COVID; and after meeting with those Texas Democrats, a White House staffer and an aide to House Speaker Nancy Pelosi also tested positive. All of those people are said to be fully vaccinated.

Fauci said studies are still underway "to determine whether or not we will need boosters to increase the durability of (vaccine) protection.

Pressed on the potential need for booster shots, Fauci said it depends on antibody levels:

We know from studies, from the clinical trials, as well as from animal studies, that there's a baseline level below which you go, you're at much more vulnerable to getting a breakthrough infection. So, the first (indicator) is laboratory data.

The second is watching and following cohorts of people to see if you have an increase in breakthrough infections. We know, according to the clinical trial, take for an example the mRNA, they are 93 to 94 percent effective in preventing clinically recognizable disease.

If you see a fall below that into the 80s or even unfortunately--hope it never happens--into the 70s, then you know you've reached the point where the durability needs a boost. Those studies are ongoing right now.

Fauci said preliminary data from Pfizer on studies conducted in Israel "seem to indicate that there is waning immunity. We have a lot of cohorts that we're following. The CDC is following at least 20 cohorts that'll be able to amplify on that data and give us much more of a basis of making a decision."

CDC Director Rochelle Walensky said the cohort studies represent "tens of thousands of people" across the United States, some involving nursing home facilities and others including health care workers. "We have cohorts across the country where we're following these data and really looking at it every several weeks to understand what the vaccine efficacy is," she said.

Fauci noted that so far, the vaccines used in the United States protect against "clinically apparent disease, and it protects extremely well against hospitalization and deaths." But the vaccines don’t necessarily prevent breakthrough infections.

Dr. Walensky said studies are underway to capture data on the percentage of fully vaccinated people who contract breakthrough infections.

On that same topic, Dr. Fauci told the committee:

I think people need to appreciate, when you talk about breakthrough infections, that the original data from the clinical trial, the efficacy data, was based on preventing clinically apparent disease, not preventing infection, such as asymptomatic infection.

So, when you hear about a breakthrough infection, that doesn't necessarily mean the vaccine is failing because it's still holding true, particularly with regard to protection against severe disease leading to hospitalization and deaths.

So, as per your question, what are we doing? We will be following for two years, the people who are in the clinical trials, the 30,000 and 44,000 people, to be able to determine just what percent now in the context of the delta variant are actually breaking through to determine if it's more than that original that we saw or in the context of delta, if it's actually much more.

Asked if she supports vaccine mandates for grade school students, Dr. Walensky said she needs to "see the data" first:

"I hope they're efficacious. But first we need to see the data, understand the risk benefit. So I think that's premature at this point." Fauci agreed: "You have to make decisions based on data. We don't have that data right now. When we do, then we could address the decision."

We have learned enough over the last year to understand what we need to do to keep our children safe, and we believe based on the science that we can keep them safe in those settings.

How are we going to keep them safe? First and foremost is, the best thing would be to have everybody vaccinated who can be vaccinated. Surround unvaccinated children who are no longer--who are not yet eligible -- with people who are vaccinated to protect them.

So, that is the highest and most important thing. For those children who are not able to be vaccinated, they can and should wear a mask in those school settings, and we have said that in our guidance.

I want to also comment on one other thing, and that is--that I think is critically important in the school year coming ahead and that is the role of testing.

Senator Burr has talked about the importance of other viral syndromes, flu, influenza. We are going to see upper respiratory infections in these schools in the fall. These kids have not been in school. They have not been with each other.

And, I am worried about the upper respiratory infections, and we are going to have to understand what is COVID and what is a simple cold among children. So, those are among the things I'm thinking about.