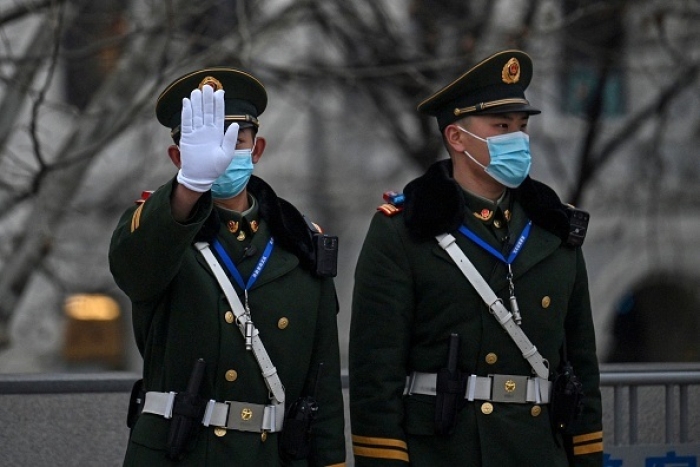 "It seems obvious the U.S. shouldn't allow its most significant geopolitical rival, an oppressive communist regime, to establish police stations in the U.S.," Scott told the Senate Homeland Security Committee. "What authority or jurisdiction does the CCP have in the U.S.?"

"Well, Senator, like you, I'm very concerned about this," Wray responded:

"We are aware of the existence of these stations. I have to be careful about discussing our specific investigative work. But to me, it is outrageous to think that the Chinese police would attempt to set up shop, you know, in New York, let's say, without proper coordination.

“It violates sovereignty and -- and circumvents standard judicial and law enforcement cooperation processes. And the reason -- the reason this is so important is because we have seen a clear pattern of the Chinese government, the Chinese Communist Party, exporting their...repression right here into the U.S.

"And we've had now a number of indictments that you may have seen of the Chinese engaging in uncoordinated "law enforcement" action right here in the United States, harassing, stalking, surveilling, blackmailing people who they just don't like or who disagree with the -- the Xi regime.

"And so, it's a real problem and it's something that we're talking with our -- our foreign partners about as well, because we're not the only country where this has -- has occurred."

Wray said the FBI is "looking into the legal parameters" of the situation: "But I -- suffice to say, I can tell you, from an FBI director perspective, I'm deeply concerned about this and I'm not going to just let it lie."

"Well, of course, the -- the threat of China is one of the most significant threats that we face in the homeland," Mayorkas said. "It's not only a matter of national security, it's a matter of homeland security in a number of arrays, in a number of areas of our mission."

Majorkas deferred a question about shutting down the stations -- the legality of it -- to the Justice Department. "And then there may be a State Department dimension to this that we're looking into," he said.

Scott asked the FBI director, "Do you know if they're surveilling US citizens? Do you know that yet?"

Wray said he wouldn't get too far into the FBI's investigation.

“And -- and one of the things that we're seeing more and more is them hiring private investigators here in the US to essentially be their -- their agents, if you will, to conduct some of this work.

"So, this is something we're trying to call out. And it's important that Chinese Americans and Chinese dissidents who are here know to call the FBI to report when they think they may have been targeted with this conduct."

Wray said he would be "happy" to set up a classified briefing for Scott.