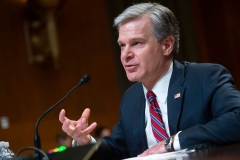 (CNSNews.com) - Of all the threats he deals with as FBI director, Christopher Wray on Thursday singled out one particular threat -- the threat of violent crime.

Wray, in his opening statement, told the Senate Judiciary Committee he speaks with police chiefs and sheriffs all the time, "and the number one concern I hear from them by far is rising violence, whether it's gangs terrorizing a neighborhood, well-known trigger-pullers who keep finding their way back out onto the streets, robbery crews graduating from carjacking to aggravated assaults and worse -- the violent crime problem is real, and it's one we are determined to combat.”

Wray said the FBI is working closely with local partners across the country, through more than 300 FBI task forces with some 3,000 members, to identify and target the most dangerous offenders, or "the worst of the worst," as he put it.

He reported that in just one week this summer, the FBI in Phoenix arrested more than a dozen people on drug and firearms charges as part of a gang investigation; the FBI in Sacramento arrested eight people and seized "pounds" of amphetamine, fentanyl and multiple handguns; and the FBI in San Antonio arrested 18 suspected drug traffickers with cartel ties.

"That is just three FBI field offices in a single week," he said.

Sen. John Cornyn (R-Texas) asked Wray if criminal street gangs are the primary distribution network for illegal drugs that come across the border.

"I think anecdotally, I don't know if I have the intelligence assessment in front of me, but I think we would say that criminal street gangs are the vehicle that we interact with the most as distribution mechanisms for drugs that are coming from the cartels and transnational criminal organizations south of the border," Wray said.

"And these criminal street gangs...are responsible for a significant portion of the violence, including gun violence, in communities across our country as a battle for market share and territory, correct?" Cornyn asked.

"Absolutely right," Wray responded. “When I'm out talking with chiefs and sheriffs, and I talk to them just about every week, I find more and more that that's what we are seeing. There certainly are national gangs that we're concerned about, but Americans might be surprised to hear how many essentially neighborhood gangs...are the biggest driver of violence."

"Ok," said Cornyn. "And when you talk about the rise in violent crime being one of your most urgent concerns, I think the country certainly would agree with you that statistics tell the tale of a significant spike in crime and of course along with it the public concern for that. Would you attribute some of the violence, increased violence that you are seeing, to these gangs and their drug businesses? I'm trying to figure out if you will agree with me that there is a nexus between drugs, gangs and guns. Is that correct?” Cornyn asked.

"Absolutely," Wray said. "I mean, one of the first things I'm asked in all these field office visits both (from) our own people and our law enforcement officers when we sit privately and have listening sessions where I'm really asking them questions, that's -- what you just said is something I hear about over and over and over again."