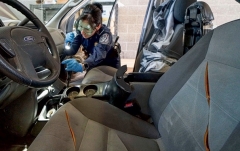 An ICE agent searches an automobile for drugs at the San Ysidro Port of Entry. (Photo by SANDY HUFFAKER/AFP via Getty Images)

He was responding to a question from Steve Chabot, an Ohio Republican, who asked Wray:

"The chaos at our southern border - doesn't this play right into the drug cartels? The current policies down there on the southern border -- isn't more of that drug coming in and killing far too many Americans? Don't we really need to control that southern border?"

"Well, I absolutely agree that the security situation at the southwest border is of great concern, both from a perspective of drug trafficking, human trafficking, violence on both sides of the border, corruption, etc.," Wray replied:

And certainly we are trying to do our part to contribute to that because, as you mention, the scourge of opioids -- opioid abuse, fentanyl in particular, is something that is sweeping the country, and I know that in your home state (Ohio) that's a particularly significant concern.

So there's a whole bunch of things that we're doing with our partners. But make no mistake, this goes beyond, way beyond, law enforcement into other agencies and, frankly, the community as well.