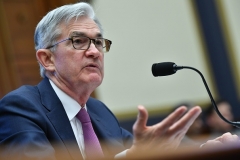 (CNSNews.com) - Even before Congress acts to raise the minimum wage, some companies are signalling that they do not plan to re-hire workers laid off during the pandemic.

That reality is particularly dire for women -- and particularly women of color -- who are "over-represented" in public service sector jobs, such as those at hotels and restaurants, Federal Reserve Board Chairman Jerome Powell told Congress on Wednesday.

"But I would say, as the economy reopens, there should be a wave, really, of people going back to work in those sectors,” Powell told a hearing of the House Financial Services Committee.

The question is going to be, some of them will not be able to go back to work, because, you know, we're hearing their surveys suggesting that those companies have been figuring out ways to do their business with fewer workers. And they--they're doing that all the time.

But that process may have been accelerated because of this episode (pandemic). So it's pretty likely that--that some of those people will not be able to go back to their old jobs. And they're going to need continued support and help to find their way in this post-pandemic economy, which will be a different economy.

Powell said the economic dislocation caused by the coronavirus pandemic has been particularly hard on a group that already was less able to withstand job losses.

"So, you know, we're in a situation where the best thing we can do is get those sectors open as soon as possible and, in the meantime, give people the support they need so they can continue the lives that they've had."

At another point in the hearing, Powell repeated that the post-pandemic economy may not have enough jobs for unskilled people:

What we're going to find, based on some of the surveys we've heard about, is that not all those jobs are going to come back, because people have started to implement automation and things like that. These are--these are service sector jobs and that's been an ongoing process. It will have been accelerated.

So, many of those people may find it hard to get back to work, and I think they're going to need further support. So, I would be looking at that over time as the livelihood that they had in the service sector may not be easy to replace. There just may not be enough jobs.

There's going to be a need for training and replacement and support in the meantime so that these people can hang onto the lives that they had and find new work.

"But I'm saying for purposes of this exercise, we should think of them as unemployed because they want to come back in."