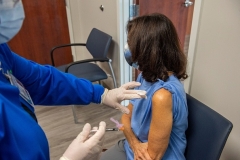 (CNSNews.com) - Dr. Scott Gottlieb, who served as Food and Drug Administration commissioner for two years in the Trump administration, anticipates a post-holiday spike in COVID cases; he says "COVID is not going away," although it may be controlled; and he says the CDC's "confusing message" on booster shots may be "one of the biggest missed opportunities in this pandemic."

"Look, COVID is not going away. This is going to be an endemic virus that stays with us," Gottlieb told CBS's "Face the Nation" on Sunday.

"A lot like the flu, we may have to get revaccinated for this on an annual basis. But this is not going to be sort of the pervasive risk that it is right now, where it dominates our lives and dominates the economy."

Although the virus isn't going away, we may get it under control, Gottlieb said:

I think COVID is going to be under control in the back end of this Delta wave through a combination of population-wide immunity.

We're going to have a lot of people with immunity, either through vaccination or through infection -- people who choose not to get vaccinated are probably going to get infected by this Delta variant -- as well as the more rapid and widespread deployment of the tools that we're now getting available, the orally available antiviral drugs that people should have available in the first quarter, if things go well, including one drug from the company I'm on the board of, Pfizer, as well as the widespread availability of vaccines, including for children.

We now have the tools to really get this under control.

Gottlieb noted that some parts of the country haven't experienced the "delta wave" yet, and he anticipates a spike in cases as we head into the holidays:

Well, look, we're going to see a post-holiday spike. There's no question about that.

People are exhausted right now, but we need to remain vigilant just for a little bit longer. I think we can finally see the light at the end of the tunnel in terms of declining prevalence on the back end of this Delta wave and also with the deployment of new technology that we have.

We now have orally available drugs that should be available in the first quarter. We have vaccines available to children. So, we see a point in time when this is going to still be a pervasive risk, COVID, but it's not going to be the prevalent risk it is right now, where it's -- where it dominates our lives.

Now, when you look across the country, though, you really have to look at the country in terms of about 10 different regions and how this coronavirus has been experienced all through this pandemic.

So, if you're in parts of the South right now or the Southeast, even if you're in the Pacific Northwest, where cases are coming down quite dramatically, or the Plains states or certain Mountain states, things are looking pretty good. And South -- in the South, the prevalence is very low and unlikely to bump up substantially.

But if you're in the Southwest right now, you're in the Great Lakes region, Wisconsin, Minnesota, Michigan, you're in parts of New England or Western Pennsylvania or Northern New York, or certain Mountain states like Colorado, things don't look good. You haven't experienced the Delta wave yet, and things are going to get worse before they get better.

The federal Centers for Disease Control and Prevention is now recommending COVID booster shots for people 65 years and older, 50–64 years with underlying medical conditions, or 18 years and older who live in long-term care settings.

But the booster recommendation should apply to all vaccinated Americans, Gottlieb said:

Well, look, I think the confusing message around the boosters may -- may end up being one of the biggest missed opportunities in this pandemic.

We now see very clear evidence of declining vaccine effectiveness over time. There's different reasons why that may be the case, but the trend is unmistakable. And this has been apparent since the end of the summer. Now it's very clear. Anyone who's eligible for a booster -- and most Americans probably are eligible for a booster at this point -- should be going out and seeking it.

And this is the fastest way that we can increase the total immunity in the population, because someone who has an old vaccine that may only have 50 percent of its effectiveness left, they go out and get a booster, they restore 95 percent effectiveness, based on the data that we've seen, within a matter of days.

So the fastest way that we can get increased immunity in the population, increase the total immunity in the population, may be through boosting people who've already been vaccinated with two doses. Plus, it's going to be easier to convert that person. It's going to be much easier to convince someone who's had two doses of vaccine to go out and get a third than to convince one of the 18 percent of Americans who's chosen to remain unvaccinated this long to get vaccinated for the first time.

Gottlieb said immunity should be viewed not just by how many people have been vaccinated, but also by the "depth of immunity."

"How many people have a lot of residual immune protection against this virus and are going to be what we call a dead-end host, are not going to be someone who can catch and spread this virus?

"And the fastest way to turn someone into a dead-end host is to get them fully vaccinated. There's a lot of people with declining vaccine effectiveness right now who can both catch and spread this virus. If we give them a booster, we restore the full effectiveness of that vaccine.

"The other way, unfortunately, is to -- to get immunity to the population quickly is to get people infected. And, unfortunately, that's the way a lot of people are choosing to do this. If you go out and start vaccinating someone right now for the first time, it might take five or six weeks for them to get full immunity.

"In many parts of the country, this Delta wave will be over in five or six weeks, so we need to do what we can right now," Gottlieb said.