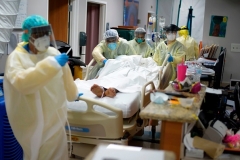 Healthcare workers move a patient in a Houston, Texas Covid-19 Unit on July 2, 2020. (Photo by MARK FELIX/AFP via Getty Images)

(CNSNews.com) - Dr. Scott Gottlieb, who served as FDA commissioner for the first two years of the Trump administration, said on Sunday he thinks the coronavirus situation is "going to get worse before (it) gets better."

"There's some private modeling floating around that shows that this is possibly going to peak in the next two or three weeks," Gottlieb told CBS's "Face the Nation."

You see Google mobility data and open table reservations starting to decline in these southern states where these dense epidemics are happening, which is an indication that consumers are pulling back. And that's going to create somewhat of a backstop.

But I think what you're likely to see in the south, which is different than New York -- New York really followed the pattern of Italy, where it was a sharp up, a huge epidemic, but it came down rapidly.

I think in the south you're likely to see an extended plateau. We really don't have a national approach here. What we have is state approaches that are creating regional effects. And so those regional effects are different.

The New York experience mirrored Italy. I think the southern experience is more likely to mirror Brazil, where you're likely to see more of an extended plateau once we reach that apex. And you could reach the apex in the next two or three weeks.

Gottlieb said the COVID-19 flare-ups have been a "regional experience" in this country because some states opened "too early, in my view, and people became complacent, especially younger people. They were going out and not taking precautions. Older people were taking precautions. They were protecting the nursing homes and the vulnerable.

But, inevitably, what happens is that the younger people go out and get infected because they're not taking those precautions. It's going to get back into a more vulnerable population. And that's what we're seeing right now. You're seeing rises cases in nursing home. Positivity in these states is actually declining in the younger population, but rising in the older population. And if you want sort of a proxy for that experience, you look at Iran.

Iran had a major epidemic. It came way down. They had a second peak. It was mostly in younger people. They said, don't worry, it's younger people, so we're not going to see the same level of deaths. But, eventually, the infection seeped into an older population.

That's what's happening now. You're starting to see more outbreaks in nursing homes. So, tragically, we're going to see deaths start to rise. And that's why I said two to three weeks until you see deaths get back above 1,000.

Host Margaret Brennan asked Gottlieb if "offices and schools should be changing their filtration systems," given the aerosol spread of the virus.

"I think this is something they should look at," Gottlieb said.

This could be spread primarily through droplet transmission. But in certain settings that are very conducive to respiratory spread, you get something that approximates airborne transmission. And what -- what are those conditions? It's enclosed spaces, spaces with recirculated air, air conditioned spaces where it's cooler and it's more conducive to spread.

So in optical conditions indoors, you might get the kind of spread patterns that approximate airborne transmission. And in those settings, we should be thinking about trying to improve conditions, putting in HEPA filters, putting in UV light in the air conditioning systems. I think these are things you should be looking at.

And, in fact, many businesses are doing that. They are looking at retrofitting, you know, air conditioning systems. It's -- it -- in some cases it's not very expensive to do that. In other cases it might be more expensive.