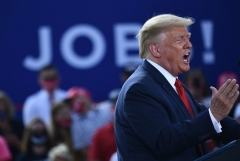 President Donald Trump delivers remarks on the economy at an airport hanger in Oshkosh, Wisconsin on August 17, 2020. (Photo by BRENDAN SMIALOWSKI/AFP via Getty Images)

(CNSNews.com) - Despite the media's focus on COVID and the daily slams on the president's handling of the pandemic, registered voters say the economy is "the most important issue ...that may potentially affect their choice for president," Gallup reported on Monday.

The poll found that nearly nine in 10 registered voters consider the presidential candidates' positions on the economy to be "extremely" (44%) or "very" (45%) important to their vote.

Notably, "Relations with Russia" ranked last in the list of 16 issues presented to voters.

The poll was conducted Sept. 14-28, and it goes without saying that a lot has happened since then, including the Trump-Biden debate and the President's hospitalization.

The economy is typically rated as a highly important issue in helping voters decide whom to support in presidential elections. This was especially the case in 2008 amid the Great Recession when 55% of voters said it was of the utmost importance. In each presidential election year since 1996, between 85% and 95% of registered voters have rated the economy as extremely or very important.

Not surprisingly, Gallup found a partisan divide on the issues that matter most to voters:

Republicans assigned the most importance to the economy and national security, followed by crime, education, and gun policy.