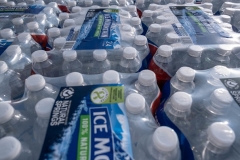 Nothing in Georgia's new election integrity law bars people from getting water, as long as they serve themselves. But political partisans can't use water, food, or gifts to approach waiting voters and urge them to vote for a particular candidate. (Photo by SETH HERALD/AFP via Getty Images)

(CNSNews.com) - A minor provision of Georgia's new election integrity law is being mocked -- and misrepresented -- by critics all the way up to the president of the United States.

But that's not what the law says.

(1) Within 150 feet of the outer edge of any building within which a polling place is established;

(2) Within any polling place; or

(3) Within 25 feet of any voter standing in line to vote at any polling place.

A footnote on page 71 of the bill says: "This Code section shall not be construed to prohibit a poll officer ... from making available self-service water from an unattended receptacle to an elector waiting in line to vote."

The provision is intended to prevent political partisans from approaching waiting voters, handing them water, or food, or gifts, or whatever -- then urging them to vote for so-and-so. That is called voter solicitation.

But clearly, the goal of Georgia law is not to prevent thirsty voters from helping themselves to water, if it's available; or if they can't plan ahead and bring their own.

Kemp said people "should be asking, why am I standing in line that long to start with?"

According to the National Conference of State Legislatures, every state places some restrictions of political activities near polling places when voting is taking place.