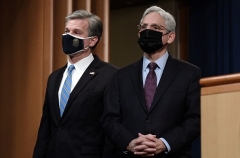 (CNSNews.com) - It doesn't matter whether you're a Democrat, a Republican, a liberal, or a conservative: "If 30 FBI agents can take over the house of a former president of the United States and probable candidate for president, what can they do to you?" former House Speaker Newt Gingrich asked on Monday night.

"But the purpose of it is simple. They want to control you...If this government and get away with Third World tactics worthy of Venezuela, with the East German Stasi or Zimbabwe under Mugabe, if that's the future, then the Constitution as a working document has ceased to exist."

Gingrich said the response to the FBI raid on Trump's home is to "go beat them at the polls in November," then "rip the corruption out" of the FBI and across the entire system.

Gingrich said he couldn't believe it when he first heard about the "totally unnecessary" raid on Trump's Mar-a-Lago:

"The fact is, he did nothing wrong, he's cooperated, and for his trouble -- and you just heard Eric say this, the Trump family has been persecuted more than any presidential family and history.

"And I just want to repeat, if they can do this to a farmer and potentially future president, what can they do to you or your cousin or your friends or your neighbors? And I think it's a very scary step towards a police state, eliminating the Constitution as a real document."

"These people get up every morning, terrified. They know they are at war with the American people. They know that overwhelmingly the American people disagree with them, and if they can't find some way to intimidate us, to force us on defense, to tell us to shut up and that's why they go out and they deliberately humiliate somebody, because you know what that does? That sends a signal to six or eight or 10,000 people. You want to be humiliated?

"And I have friends now who tell me, serious senior professionals, that they're frankly frightened. They don't want to stand up and say they are for Donald Trump because they are afraid of what's going to happen, either their big corporation is going to fire them, or if they are a lawyer, their law firm may kick them out.

"Or they may be visited one morning by the FBI. Or by the IRS. Remember we had a whole IRS scandal under Obama where they were targeting specific people.

"Do not underestimate how deliberately these people are committed to doing whatever it takes, including destroying the Constitution, in order to retain power, and that's going to be a major issue between now and the election this fall."